NEW YORK: Stocks on global markets rallied on Friday and registered strong gains for the week as a recent slide in commodity prices eased worries about inflation and the rate hike outlook.

The S&P 500 climbed 3.1% in its biggest daily percentage gain since May 2020, and the MSCI global index rose 4.8% for the week, snapping three straight weeks of declines. Read full story

Investors have been worried that aggressive interest rate hikes by the Federal Reserve and other major central banks to combat inflation could cause a recession, which would reduce demand for commodities and other items.

"The (stock) market came into this week oversold, so it was time for a bounce," said Quincy Krosby, chief equity strategist at LPL Financial in Charlotte, North Carolina.

"We've seen oil prices come down along with other commodity prices," she said, adding that the market's move is reflecting "expectations of at least a marked slowdown if not an out-and-out recession."

Also, the University of Michigan consumer sentiment survey's reading on five-year inflation expectations was positive for stocks, Krosby said. It eased to 3.1 from the preliminary 3.3% estimate in mid-June. Read full story

Benchmark copper CMCU3 on the London Metal Exchange was 0.5% lower at $8,367 a tonne after touching $8,122.50, down 25% from a peak in March and the lowest level since February 2021. Read full story Other industrial metals also tumbled.

Oil prices were higher Friday on but notched their second weekly decline.

In the Treasury market, yields have dropped from more than decade highs reached before last week's Fed meeting. The U.S. central bank hiked rates by 75 basis points at the meeting. Read full story

Fed funds futures traders are now pricing for the benchmark rate to rise to about 3.5% by March, down from expectations last week that it would increase to around 4%. FEDWATCH, USONFFE=

In the foreign exchange market, the U.S. dollar fell and posted its first weekly decline this month.

The U.S. dollar's slide boosted even commodity-focused currencies such as the Australian dollar and Norwegian crown. The Aussie AUD=D3 rose 0.8% to US$0.6946. 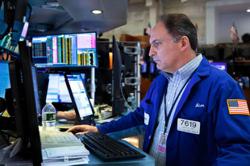