TV review: ‘The Outsider’ drags you down a dark road

Participants in The Purge were getting younger each year.

Then there are mystery yarns that start out as such, and turn into something quite different altogether. The Outsider, an adaptation of the 2018 Stephen King novel, is one of these.

Adapted by novelist/screenwriter Richard Price (The Night Of), this 10-episode miniseries expands considerably on the source material while staying largely true to its spirit.

While it first aired here on HBO from January to March, it’s quite likely that it went unnoticed by many. Not to worry, because it’s all available on HBO Go or Astro

On Demand – and, somehow, seems rather more relevant in these days of social distancing and being worried about what you get on your skin or in it.

At the same time, it also does a really good job of getting under the viewer’s skin, unnerving and troubling you while you obsess over its twists and turns and the welfare of its characters (some clueless, many sympathetic).

‘Your stubbornness won’t last, Terry. If I could get a pacifist to build the Death Star, you don’t have a hope.’So, here’s the mystery: a young boy named Frankie Peterson is found savagely mutilated and murdered in the woods of Cherokee City, Georgia. Witnesses and fingerprint evidence point to local little league baseball coach Terry Maitland (Jason Bateman), a popular and respected family man.

The evidence is so compelling that both the District Attorney and police detective Ralph Anderson (Ben Mendelsohn) make a grandstand play of his arrest, dragging him off in handcuffs during a big game.

Except it soon comes to light that Terry was over 100km away at the time of the murder, and caught on video grilling the panellists at a teaching conference.

From a rock-solid case, Ralph finds himself on shaky ground now. But, before anything further can be done, a series of tragedies – snowballing out of poor Frankie’s murder – leaves the entire community rocked and desperate for answers.

We were thrown a curveball in the book when King suddenly introduced a well-liked, idiosyncratic character from one of his more recent series (the Bill Hodges/Mr Mercedes trilogy to be precise), giving readers’ frayed nerves a sudden anchoring point. After all, here was someone who helped make things right over the course of three other novels.

With this adaptation, however, viewers would have no such context for them to feel any relief. Yet the introduction of that character here is a welcome ray of light all the same, thanks to Cynthia Erivo’s luminous performance in the role. 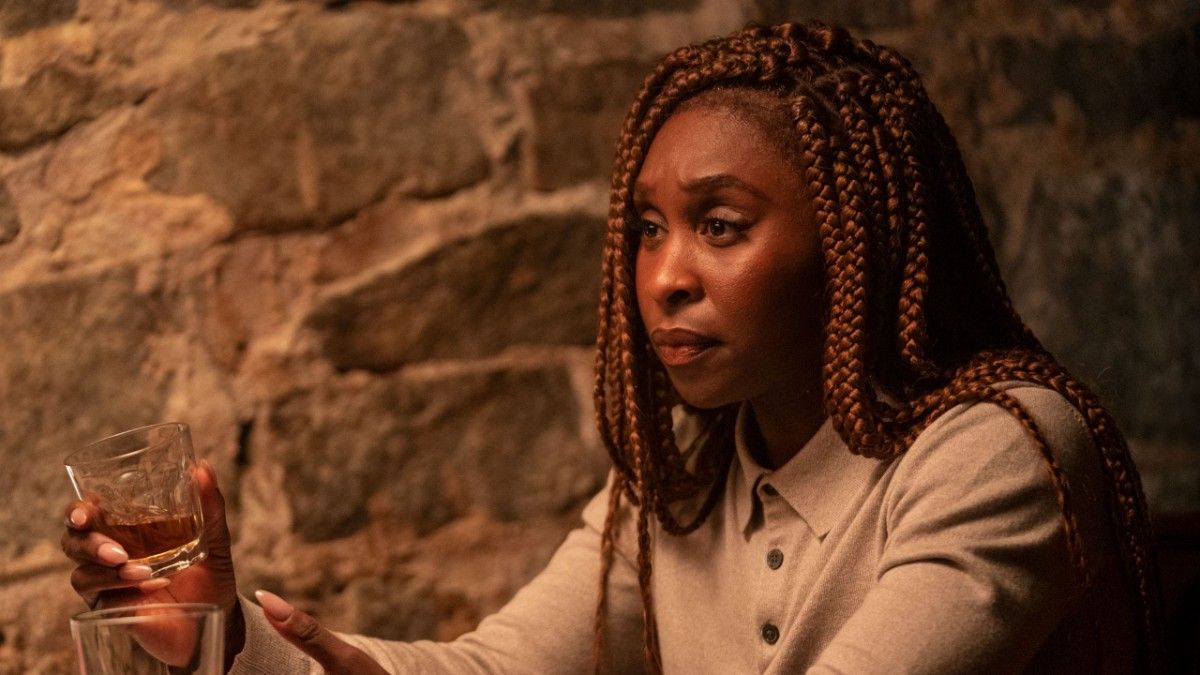 ‘All right... so you’ve learned my secret for staying so calm and serene. Whiskey. Lots.’She plays Holly Gibney, a savant and investigator hired by Terry’s defence to help unravel the mystery. Up to the time she appears, the cast members (Mendelsohn in particular) do a great job of giving their characters the right touch of familiarity and being lived in, making it all seem like a slighty larger-than-life true crime story.

Erivo knocks it out of the park once she comes on board, though, as Holly does things her way – sometimes to the complete sidelining of everyone else’s sensibilities and feelings.

Far from being some kind of deus ex machina, though, Holly is kept very human and fallible, being especially hesitant when she finally meets the different parties involved to present her theory of what happened (and will happen again).

It’s a significantly larger part she has to play here than she had in the book, and Price has even given her a retinue of one: a former cop named Andy Katcavage (Derek Cecil), a character who was not in the original.

As Vulture.com points out, Andy is important to push the story along by giving Holly someone to talk to about her theories – or else there’d be a lot of monologues, “thought balloons” and other gimmicky stuff.

But Andy and Holly also share a sweet, clumsy romance that helps take the dark edge off everything else that’s going on in the show.

There’s a whole lot of darkness here: from visions and hallucinations to deformed, hooded onlookers to murder, suicide, what seems like possession and, worse, a long trail of murders and grief spanning many miles and many years.

All of this, complemented/underscored by a haunting, discordant musical motif (in which one of the instruments could almost be the hinges of a rusty swing) that is used a lot in the early episodes, then vanishes and returns later as things barrel to a conclusion.

I do have some minor gripes. The Outsider is a slow-burn type yarn, but I felt Price and Co could have tightened the pace and intrigue by dropping at least one episode (hey, Watchmen was terrific with just nine episodes). And we could also have done without that whole segment involving Holly and the murderer’s unwilling accomplice.

The padding aside, this is a thoroughly satisfying King adaptation that manages to explore the depth, fear, baggage and motivations of its key characters in a way that doesn’t take anything away from the central plotline.

Even though its ending leaves a tiny crack open for a possible second season, or even a spin-off featuring a key figure, I would be happy if it all wrapped up with this. One and done. Just like Watchmen, too.

All 10 episodes of The Outsider are available on HBO Go and Astro On Demand.