US pledges to expand economic ties with Laos 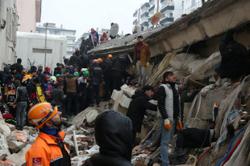 Camille Dawson gives an interview with reporters during her visit to Laos. - US Embassy in Vientiane

VIENTIANE (Vientiane Times/Asia News Network): The United States is keen to broaden its economic cooperation with Laos and is committed to helping the country achieve sustainable development.

Deputy Assistant Secretary in the Bureau of East Asian and Pacific Affairs, Camille Dawson, confirmed the US government’s intention in an interview with reporters on Wednesday during her visit to Laos.

She was asked whether the United States could help to ensure that more Lao products reach US markets, as part of efforts to promote sustainable development in Laos.

In response, Dawson said people in Laos should form closer connections with the Lao diaspora in the United States. This would be a wonderful channel to facilitate the export of Lao products to the US because these people understand the US business environment and what market opportunities might exist there.

She stressed that the Lao diaspora could serve as a bridge to boost trade between the two countries.

“We are partnering with the government of Laos, the private sector and businesses to support economic development and enhance the competitiveness of small and medium enterprises,” she said.

“We are eager to encourage investment in Laos and further encourage trade between the two countries.”

The United States supports a programme to encourage Lao producers to produce high quality products for export to the US.

Two-way trade between Laos and the US increased significantly following the signing of the Bilateral Trade Agreement in 2003 and the Trade and Investment Framework Agreement in 2016.

Dawson said the United States has a strong focus on regional economic connections, ensuring Laos is connected through Asean and that there are ways in which economic development is spread across the region and connectivity go beyond the region to the world.

The US attaches great importance to the Indo-Pacific region, which represents over half of the world’s population and two-thirds of global GDP.

“The United States recognises that our own prosperity as a country is tied to the prosperity of the Indo-Pacific region. It’s in our own interest to ensure that the region is able to thrive economically,” Dawson said.

The US-Lao relationship continues to grow and reached a new high in 2016 when President Obama visited Laos and elevated the countries’ bilateral ties to a comprehensive partnership.

“The United States continues to strengthen its relationship with Laos based on mutual respect, including respect for Lao independence and sovereignty,” Dawson said.

The US-Lao relationship encompasses a range of factors, from war legacy issues to development assistance, nutrition, support for agriculture, and other areas of engagement.

Since Laos is a country in South-East Asia with the majority of its population under the age of 25, the United States has pledged to support young Lao people through English language training and the Young South-East Asian Leaders Initiative.