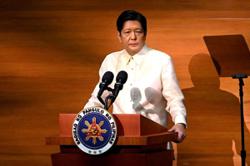 Lawmakers said that they would revise a proposed law creating a US$4.9bil (RM21.5bil) sovereign wealth fund after concerns were raised over potential corruption and risks to workers’ pensions.

Congressmen Sandro Marcos and Martin Romualdez – President Ferdinand Marcos Jr’s son and cousin respectively – are among the authors of the Bill establishing the “Maharlika Investments Fund”, which was to have been seeded by government-run banks and pension funds.

But Stella Quimbo, another of the Bill’s co-authors, said congressional leaders decided to exclude the pension funds as contributors and instead seed the initiative with Philippine central bank profits.

“It’s good that we conducted a series of consultations about the Bill,” Quimbo said on Wednesday.

“It validated the concerns of our people, especially the Filipino workers who remit their contributions to the GSIS and SSS,” she said, referring to the funds by their acronyms.

The proposed law, aimed at raising capital for big-ticket development projects, had stoked anger among activists and opposition figures.

Conventional sovereign wealth funds are seeded by windfall government profits from natural resources, such as oil or minerals, rather than from pension funds.Business groups said the government was already running huge deficits and the proposed law risked downgrading its credit rating.

Critics also questioned the plan to designate the president as head of the fund’s board.

Marcos Jr’s late father and namesake was accused of embezzling billions of dollars from the national treasury during his 20-year rule. His estate was also accused of failing to pay US$3.6bil (RM15.8bil) in taxes.

House leaders have discussed a new version of the Bill that was drafted by the president’s economic advisers, which will be tackled by the House appropriations committee on Friday, Quimbo said.

Lawmakers will “put in place safety nets” to ensure government funds are safeguarded, she said. — AFP