Firefighters had to force their way into the unit to put out the fire. - SINGAPORE CIVIL DEFENCE FORCE/FACEBOOK, SCREENGRAB FROM MY1CENTWORTH/YOUTUBE

SINGAPORE (The Straits Times/Asia News Network): A firefighter from the Singapore Civil Defence Force (SCDF) was taken to Singapore General Hospital after falling unconscious while putting out a fire in a fourth-floor unit in Henderson Road.

In a Facebook post, the SCDF said it was alerted to the fire at 91 Henderson Road, in Bukit Merah, at about 11.10am on Thursday (Dec 8).

Firefighters had to force their way into the unit to put out the fire.

In a video posted on social media that was taken from a neighbouring estate, plumes of smoke can be seen rising from the unit.

The Straits Times has contacted SCDF for more information. 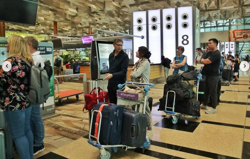