Heavy rain in Toa Payoh on Nov 29, 2022. A new research programme to boost weather and climate research was launched on Dec 6, 2022. - The Straits Times/ANN

SINGAPORE, Dec 6 (The Straits Times/ANN): Aiming to improve weather prediction and climate projection capabilities in Singapore and the region, a new research programme was launched on Tuesday.

The multi-year programme will boost weather and climate research in Singapore and the wider South-east Asian and Indo-Pacific regions.

It forms part of a strategic relationship agreement between Singapore’s National Environment Agency (NEA) and Australia’s Bureau of Meteorology.

Research will go into very-short-range weather forecasting - predictions for the next two hours - using advanced weather radar data, seasonal prediction, and the analysis of regional climate projections data, said both agencies on Tuesday.

As such, these research initiatives will also contribute to improved prediction of heavy rainfall in Singapore, through improved guidance on emerging seasonal climate trends in the region and the sharing and development of novel climate data analysis tools, they added.

For instance, improved predictive performance should be expected regarding the El Niño–Southern Oscillation (Enso), a naturally occurring Pacific Ocean phenomenon that has major impacts on the world’s weather.

La Nina phases lead to a cooling of the waters off equatorial South America and a strengthening of the winds blowing towards East Asia, piling up warmer water around the region and triggering cooler and wetter weather.

The outcomes of the joint research will help the Meteorological Service Singapore and the Australian Bureau deliver enhanced forecast and warning services for decision-making, as well as guide climate change adaptation plans.

The new research agreement builds on existing collaborations between the two agencies, including the Unified Model Partnership, which plans and develops capabilities of one of the world’s leading weather and climate modelling systems, they added.

In July, NEA said that its Centre for Climate Research Singapore is working on the Republic’s third national climate change study, which will provide localised and high-resolution climate projections all the way to 2100.

The study will provide South-east Asia’s most advanced climate projections, zeroing in on every 8 by 8km square of land and sea.

The V3 study, as it is called, will help countries plan ways to guard against the dangerous effects of climate change in the most accurate way possible. It is expected to be completed by September 2023. -- The Straits Times/ANN 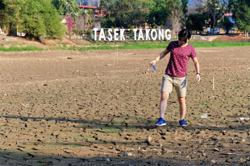