After stepping out of the Wild Elephant Valley station on the China-Laos Railway and having playful interactions with the giant creatures, tourists usually walk into Manzhang Village less than 1km away for some exotic experiences.

“Last summer, about 20 people came to my home every day to experience pottery making. This summer the number of tourists doubled, thanks to the opening of the China-Laos Railway,” she added.

The village has so far opened 13 restaurants and 24 inns to offer accommodation to the growing number of tourists.

Much like Manzhang, a number of once-obscure villages along the railway have gradually become popular tourist destinations.

“The villagers sensed the opportunity brought by the railway, and turned their courtyards into hostels to attract tourists,” said Ai Hanpeng, a resident of the Dai ethnic village of Chengzi.

The village under Mengla County boasts rich ethnic customs. Owing to its close proximity to the railway, the village is actively developing rural tourism so that the villagers can enjoy the dividend brought by the China-Laos railway.

“We have planned to hold folk festivals to attract more tourists to spend nights in the village,” Ai said, noting that the railway is the foundation of the village’s development.

Nakeli Village in Hani and Yi Autonomous County of Ning’er, Pu’er City, was once an important stop on the Ancient Tea Horse Road. Today, it has become a popular tourist town along the China-Laos Railway.

Zhang Honglei, the village head, said more and more people have come to Nakeli to start businesses, live and travel after the opening of the China-Laos Railway, adding that it has ended the history of no rail service for Xishuangbanna and Pu’er.

Tourism development has not only helped boost the income of villagers but also rejuvenated their spirit for life, Zhang said. — Xinhua 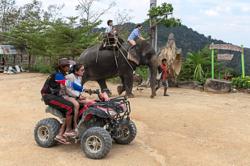