An idyllic sunset in Si Phan Don or the 4,000 islands - a famous tourists destination in Laos. - Laotian Times

VIENTIANE, Dec 5 (Loatian Times): Fodor’s Travel, the publisher with 80 years of travel expertise has recommended Laos as one of the best places to visit in Asia alongside Ayutthaya in Thailand, Bangladesh, Ho Chi Minh City, Vietnam, Madhya Pradesh in India, and Palawan, Philippines.

After being on 2023 travel lists curated by National Geographic and Wanderlust magazine, this is another feather in Laos’ cap of ever-growing praise as a tourist destination.

While the first two publishers mainly highlighted Luang Prabang as one of the most popular places in Laos, Fodor’s Travel reserved its high acclaim for Si Phan Don, or The 4,000 Islands in a piece subtitled, “Retreat to a laid-back island life in landlocked Laos, which boasts the world’s widest waterfall.”

The travel guide said that this archipelago of islands on the Mekong River in Southern Laos gives an insight into authentic and untouched Laotian river life.

“The area’s main attractions include the largest waterfall in South-East Asia, Khone Phapheng, the endangered Irrawaddy dolphins, and remnants from the French colonial days like the abandoned steam locomotive that is now displayed near the bridge between Don Det and Don Khon, two of the main islands in Si Phan Don.”

According to Fodor’s Travel, Si Phan Don stands out as a travel destination as it invites travelers to truly slow down and relax instead of rushing to see numerous tourist destinations.

“...Bicycle past rice fields, kayak down the Mekong River, and watch the fishermen at work; enjoy a day on the beach, then settle in a hammock by the river with some local rice whisky, lao-lao.

"Recent developments have resulted in more reliable electricity and internet service and more things to do, including tubing and the Mekong Fly Zipline—running a set of seven zip lines over another powerful waterfall, Li Phi, also called Tat Somphamit,” it added in its list of recommendations of things to do in the area.

Since several of the islands can be underwater during the rainy season and the roads are quite muddy for riding bicycles, Fodor’s Travel advised its readers that November-March is the best time to visit the Si Phan Don.

Concluding with an insider’s trip, it said, “The infrastructure in Si Phan Don is continuously improving, but ATMs are still few and far between, so be sure to take out some cash on the mainland before heading here.” - Laotian Times 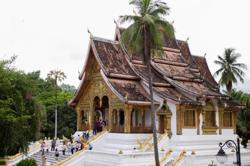