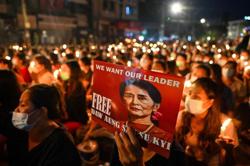 YANGON (AFP): Seventy Rohingya people hiding in a truck transporting ginger were arrested north of Yangon after the vehicle crashed into a roadside canal, the Myanmar junta said on Sunday (Dec 4).

Rohingya Muslims in Myanmar's western Rakhine state are widely regarded as illegal immigrants in the Buddhist-majority country and have long faced discrimination, restrictions on travel and been denied citizenship, health care and education.

The arrests took place a week ago, the Myanmar junta said in a statement.

The group of mostly men were hiding under ginger bags in the truck when it crashed into the canal, the statement said.

A Bangladeshi citizen was also arrested and authorities were searching for two Myanmar nationals who were driving the truck and riding in the cabin.

A Myanmar military crackdown in 2017 forced some 750,000 Rohingya to flee Rakhine state for Bangladesh following widespread accounts of murder, arson and rape.

The nation has been in chaos since Aung San Suu Kyi's civilian government was toppled in a military coup in February 2021, ending its brief period of democracy.