People carry their belongings as they arrive at a school turned into temporary shelter for those affected by the eruption of Mount Semeru, in Lumajang, East Java, Indonesia, on Dec. 4, 2022. - AP

LUMAJANG, Indonesia (AFP): Thousands of villagers living near Indonesia's Mount Semeru were racing for refuge Sunday (Dec 4) to the wail of emergency sirens as lava snaked towards their homes under a black sky after the volcano erupted.

Locals fled on motorbikes sometimes three at a time as a mushroom cloud of ash approached and monsoon rains lashed the area in East Java.

"It was dark and raining. The rain did not consist only of water, but also volcanic ash. It was like mud," said an AFP journalist on the scene.

Indonesian authorities raised their alert level for the volcano to its highest after the crater spewed hot ash a mile into the sky.

It came only a year after the volcano last erupted, killing at least 51 people and laying waste to homes.

Rescue workers were once again rushing to evacuate villagers in the area Sunday as a colossal plume of ash engulfed all light.

One emergency responder, Gunawan, filmed the clouds above as a midday sky turned ominously dark as though midnight.

"It's getting dark, bro," he said to the camera as a seismograph whistled in the background.

The internet was down and phone signals were patchy but villagers were alerted to the danger by sirens and the beating of bamboo drums by local volunteers.

Semeru is the highest mountain on Indonesia's main island of Java and lies around 800km (500 miles) southeast of the capital Jakarta among a cluster of craters in a moon-like landscape.

The eruption last year left locals combing through ruined belongings after their homes were blanketed in ash.

It remains to be seen what damage the eruption will inflict this time with the lava still edging towards homes and their owners told to remain eight kilometres (five miles) from the crater.

Many villagers, mostly women and children, took shelter in local halls and schools, some as far as 20 kilometres (12 miles) away.

Gunawan, who like many Indonesians goes by only one name, said everyone was safe for now, even if their possessions and homes might not be by day's end.

As he flashed a peace sign at a camera against the backdrop of dark haze and monsoon rains at his rescue post, he tried to reassure people. 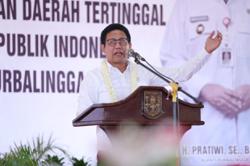