"Inflation in November reached 5.42 per cent year-on-year, lower than the previous month's 5.71 per cent," BPS Deputy for Distribution and Services Statistics, Setianto, said in a virtual press conference.

This figure exceeded the central bank's target of 2 to 4 per cent but was accompanied by a trend of economic recovery, as Indonesia's gross domestic product grew 5.44 percent in the second quarter and 5.72 per cent in the third quarter, with a surplus in the trade balance for 30 consecutive months.

Even though it is under control, "we have to stay vigilant, and we have to be careful that now the global economy is not in a normal position," President Joko Widodo emphasized.

Widodo urged all parties to have a sense of crisis, formulate grand strategies and seize every opportunity. - Xinhua 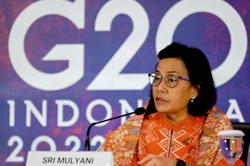