A 43-year-old cyclist involved in an accident on Nov 30 morning was taken to hospital, where he later died. - SG ROAD VIGILANTE/FACEBOOK

The police gave this update about the arrest on Thursday and said investigations were ongoing.

The 43-year-old male cyclist who was involved in the accident died. He was a member of the Australian and New Zealand Association (Anza) cycling club.

On Wednesday, the police were alerted at about 6.30am to the accident involving a car and a bicycle in Adam Road, towards Lornie Road, before the exit to the Pan-Island Expressway heading to Tuas.

The cyclist was unconscious when taken to Tan Tock Seng Hospital, where he later died.

On Thursday, Shin Min Daily News reported that the victim was riding along the road with his friends when they realised he was lagging behind.

When they looked back, they saw that he had fallen by the side of the road.

In January, Minister for Transport S. Iswaran said in Parliament that over the past five years, an average of about 560 serious accidents involving cyclists on roads have been recorded yearly. 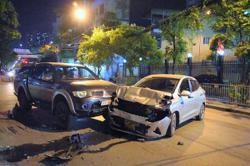