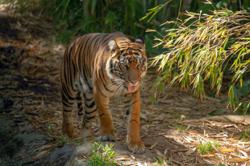 A SUMATRAN tiger, captured in August, was returned to her original habitat in Mount Leuser National Park in Gayo Lues, Aceh.

The female tiger, named Bestie, was transported by helicopter from Blangkejeren Airport to be released in Keudah on Friday.

“Keudah is the habitat of the Sumatran tiger in Mount Leuser National Park which is inhabited by tiger prey such as deer, antelope and forest goats,” said the Environment and Forestry Ministry.

When villagers trapped her in Sei Sirah of Langkat Regency in August, Bestie weighed only 65kg with a wound on her tail.

After three months at the Sumatran Tiger Sanctuary in Barumun, she has grown to 80kg and is good for release. — Xinhua