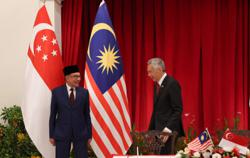 The law, which criminalises sex between men, was repealed after a debate in Parliament. - MCI

SINGAPORE (The Straits Times/Asia News Network): Parliament on Tuesday (Nov 29) voted to repeal a decades-old law criminalising gay sex, while endorsing changes to the Constitution to protect the current definition of marriage from legal challenge.

The repeal of Section 377A of the Penal Code, following a 10-hour debate over two days, saw 93 MPs voting in favour of the move.

Nominated MPs are not allowed to vote on constitutional amendments.

Law and Home Affairs Minister K. Shanmugam said Parliament’s overall choice showed that the House is the one to decide on issues of marriage rather than leave the matter to the courts and living with the potential threat of the current definition being ruled unconstitutional.

During the debate, several MPs had raised concerns about the repeal leading to cancel culture – or the practice of shutting down those with differing views.

Shanmugam said on Tuesday that the Law Ministry is looking at measures to deal with the harm caused by cancel campaigns online.

“People really ought to be free to stand by their beliefs, express their views with due respect for the feelings of others, without fearing being ‘cancelled’,” he said.

He added that as it is not an easy area to deal with or legislate on, the ministry will give more details when it has a sense of what is doable.

Responding to Louis Ng (Nee Soon GRC) on whether there are individuals with existing records of convictions under S377A and how they will be treated, Shanmugam said there are some, though most involved non-consenting victims, acts against minors, or sexual acts committed in public.

He added: “There are a small number of individuals who were convicted between 1988 and 2007 for consensual, private, homosexual acts, between adults. I have instructed my ministry to consider how the records of these persons can be rendered spent proactively.”

He also questioned the Workers’ Party’s decision to lift the Whip on its Members, saying this meant that as a party, WP had no official position on the repeal and also did not support the constitutional amendments to protect marriage.

The Whip requires party members to vote as a bloc, and WP chief and Leader of the Opposition Pritam Singh had said on Monday that his decision was due to the risk of diluting the democratic value of Parliament as the varied views of Singaporeans on the topic would not be adequately ventilated in the House.

Shanmugam said this explanation was “factually untrue”. “The Whip does not, and has not, prevented MPs from speaking their minds. MPs have always been free to express what they, their constituents think. The Whip is relevant for voting, not speaking, and the Whip sets out the party’s position,” he said.

He added that choosing not to vote for the repeal meant passing on the buck to the courts, given the legal risks of the law being struck down by the courts.

“That’s an abdication of responsibility as parliamentarians,” he said.

Singh replied that with the WP MPs indicating their positions – six for repeal and three against due to reasons of religion and conscience – the party position has now been established by way of a majority in Parliament.

Masagos said that it is the intention of the Government that there should not be a change in social norms following the repeal – precisely what Article 156 is intended to achieve.

He reiterated that education policies and curriculum remain anchored on Singapore’s prevailing family values and social norms, which most Singaporeans want to uphold. These include the family as the cornerstone of society’s social fabric, and marriage as between a man and a woman.

He also addressed NCMP Hazel Poa’s call on Monday, when she said the Progress Singapore Party wanted the definition of marriage to be decided by a national referendum.

Masagos said the Constitution sets a very high bar for a referendum – when sovereignty, or the command of the armed forces and police, is at stake. Singapore has had only one referendum in history – in 1962, on merger with Malaysia.

Masagos said of Poa’s call: “This might seem seductive, but let’s call it what it is: It is an attempt to avoid taking a position, as parliamentarians, as elected representatives of the people.”

In response, Poa said the party had shown its ability to make difficult decisions, such as its stance to support the repeal of S377A.

On the definition of marriage, she said that given the high level of interest from the public, and that it is not an area requiring specialised knowledge, it would be an issue suitable for the public to participate in. 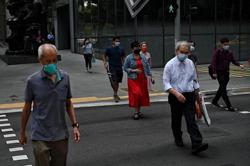