The cockfighting match is taking place in the Philippines, but it is being live-streamed to a betting audience – including Singaporeans. - The Straits Times/ANN

SINGAPORE, Nov 27 (The Straits Times/ANN): Two cockerels circle one another in a dusty arena, their feet strapped with blades.

As they attack each other, the action is caught on camera, as a commentator’s shrill exclamations in Tagalog accompany every move.

Within seconds, one cockerel drops dead and the surviving one is declared the winner – and punters stand to win thousands in Malaysian ringgit.

The cockfighting match is taking place in the Philippines, but it is being live-streamed to a betting audience – including in Singapore.

The blood sport is just one of many gambling services offered by an illegal gambling site, which had a Malaysian address it used to list on its social media page but has since been removed.

The operator’s website promotes itself as a gambling platform for Singaporeans, with copious references to the Republic, including the SG suffix in its domain name and promises of the “highest 4-D odds in Singapore and Malaysia”.

To learn more about the operation, The Sunday Times set up an account on the platform, which asked for personal information including one’s full name – to verify monetary withdrawals – as well as mobile number and e-mail address.

Registration was done in five minutes.

Upon registering, a representative of the operator with a Malaysian number immediately made contact via WhatsApp and this was followed by a voice message providing a step-by-step walkthrough to place bets on cockfights.

It also said that such bets were popular with some Singaporean gamblers.

The representative also recommended that users should download an app that can be used to access the illegal gambling website. However, the app, which has been downloaded more than 10,000 times, is disguised as one for note-taking on the Google Play Store.

A gambling interface appears when a user keys in his registered username and password.

For the cockfights, there is a requirement to have a virtual private network, or VPN, which would bypass Singapore’s likely blocking of the website showing the fights. The site also offers other gambling services like sports betting, which does not require the use of a VPN.

When asked, representatives of the website would say only that the bets involved a lot of money and that many of its customers are Singaporeans. In the cockfight that The Sunday Times witnessed, the site showed more than 30,000 bets placed, with players able to bet from RM5 (S$1.50) to RM5,000.

In the Philippines, while cockfights are still taking place, live-streaming of the fights has been banned since May 2022.

After its ban, online cockfighting in the Philippines went underground, with Filipino broadsheet the Manila Standard reporting in September that two businessmen and 37 other people were arrested for allegedly organising illegal online cockfighting.

The authorities there had said it would be difficult to clamp down on illegal gambling sites as the fights have gone underground.

In the mobile version of its website, the operator has a tab for its charitable contributions to Malaysian and Singapore entities, under which it said it provides help to people affected by the pandemic such as the elderly and people with disabilities.

The list of charities it said it contributes to numbers 24 in Malaysia and two in Singapore, including a $5,000 donation it said it made to local food charity Food From The Heart in 2020.

In response to queries from ST, the Ministry of Home Affairs said that those who place bets through illegal online gambling platforms are breaking the law and may face jail time and fines.

Some of these platforms have been marketing their services to Singaporeans, but a ministry spokesman said gambling through them is an offence, citing the Gambling Control Act which took effect on Aug 1, 2022.

Only Singapore Pools is licensed to provide lotteries and sports betting services here.

Individuals found to have placed bets with an unlicensed service provider can be jailed for up to six months or fined up to $10,000, or both.

These payments were derived from about 100,000 blocked credit card transactions, as well as 250 frozen bank accounts.

“Don’t think that you’re just doing online gambling. If you’re dealing with a shady enterprise, they may also be doing something back to you.” - The Straits Times/ANN 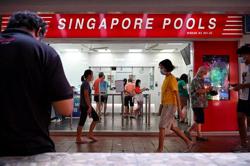