Customers smell a container of cannabis buds at a dispensary in Bangkok. - AFP

Neon-lit signs with cannabis leaves are now a common sight from Bangkok to Chiang Mai, and the drug is seeping into everything from food to drinks and cosmetics, bolstered by the promise of revenue from weed tourism.

Despite its rapid growth, Thailand’s cannabis industry is, in fact, walking a political tightrope. Businesses currently operate in a grey area due to a regulatory vacuum whereby the drug was decriminalised before lawmakers could agree on how to regulate the industry.

Growing societal concerns about the impact of legalisation also threaten to set back an industry that is estimated to be worth over US$1 billion by 2025.

“This is just about politics now. The government has come this far, but then the coalition parties now want to go back,” said Rattapon Sanrak, founder of a cannabis advocacy group that runs Highland Cafe, a dispensary in Bangkok’s Lat Phrao area.

“Criminalising it again would just force everything back underground, and entrepreneurs who want to do it right wouldn’t be able to.”

Lawmakers are expected to resume debate on a draft cannabis Bill that was designed to give the government more control over the industry as early as next week. The Bill stalled after several legislators voted to withdraw it from debate in September, arguing that it did not go far enough in banning recreational use.

The government has repeatedly said since June that decriminalisation was aimed at medical and commercial use for marijuana rather than recreational purposes. Though the draft Bill did not directly outlaw recreational smoking, it said lighting up in public will be prohibited.

Other restrictions include bans on causing unpleasant smells in public, selling to pregnant women or people under 20 and commercial advertising.

The legal uncertainties leave cannabis users and entrepreneurs concerned that they face an uphill battle against politicians who hope to undo decriminalisation with the help of civil society groups.

Many academics and medical doctors have called for cannabis to be designated as a narcotic again, and this week, a network of students, parents and teachers added to the calls with a petition bearing more than 15,000 signatures.

A deadly shooting at a preschool in October by a former cop with drug links is also stoking calls for a clampdown on drugs and guns.

Although most Thais do not link the shooting with cannabis policies, the main opposition Pheu Thai party has seized the chance to toughen its anti-drug rhetoric ahead of an election to be called by March.

Cannabis supporters argue that decriminalisation has thrown a lifeline to cities devastated by Covid-19 restrictions that have ravaged Thailand’s tourism-dependent economy.

The Tourism Authority of Thailand itself has marketed cannabis as a travel experience, launching a series of guidebooks to promote areas where tourists can visit organic cannabis farms and get cannabis oil massages.

More than a million people have already been issued licences to grow cannabis via the government’s mobile phone application since June 9, according to data from the public health ministry.

The boon for tourism is easy to see.

On Bangkok’s Khaosan Road, a haven for backpackers, a “cannabis complex” now houses more than a dozen dispensaries where visitors can shop for not only buds but also edibles, tea bags, massage oils and handmade bongs.

“Thailand is already big on tourism, and cannabis helps add value to all other businesses,” said Mr Worawut Ngamthanawit, co-owner of Joint Us, one of the shops in the Plantopia Weed City complex. The small dispensary has seen no lack of customers since opening in September, Mr Worawut said, as tourists wander Khaosan Road in search of the next exotic Thai strain to try.

“It’s the reason why I came to Thailand. I’d wanted to come earlier, but I wasn’t going until weed was legalised,” said George, adding that he used cannabis to cope with chronic back pain. “If I can’t smoke weed somewhere, I don’t go spend thousands of dollars.”

Some 14km away on a busy street in the commercial Sukhumvit area, Mr Soranut Masayavanich, owner of dispensary Sukhumweed, explained how cannabis revived the fortunes of his business and even that of the local community.

“Cannabis has helped get people back on their feet. Money is flooding into the country. We haven’t seen Thailand this energised in a long time,” Soranut said.

“All the restaurants around here are doing well. The community is thriving because of the rush we’ve brought here.”

Restaurant owner Chainat Rodsukho, whose cooked-to-order rice shop sits near Sukhumweed, said the dispensary has livened up the neighbourhood after many local businesses suffered during Covid-19.

“They didn’t cause us any trouble, and their customers are very courteous, not at all what I had imagined,” he said. “Some of the customers became my customers too.”

Sukhumweed, which sources all its cannabis from local growers, carries a lip balm infused with hemp oil that shows on its packaging a cartoon drawing of Health Minister Anutin Charnvirakul – a tongue-in-cheek tribute to the man who spearheaded cannabis liberalisation as part of his Bhumjaithai party’s campaign promises during the 2019 general election.

Dr Anutin himself has criticised opposition to cannabis legalisation as politicking, vowing that his party would not back down on its flagship policy.

“As it is written, the draft Bill is complete and can prevent misuses. Those who are against it are politically motivated, seeking only to undermine the popularity of the political party that proposed it,” Dr Anutin said, calling the policy a “river of no return.”

A groundbreaking ceremony for the first vocational school for tourism in Phnom Penh was held on Nov 24 in the presence of Minister of Tourism Thong Khon, with another set to be built in the coastal Preah Sihanouk province.

The ministry said the school in the capital will consist of two buildings of two and four floors, with special tourism-training facilities alongside everything required from a modern educational institution.

The ministry said that while the school would be able to accommodate some 600 students, it will receive around 300 students for the 2024-2025 academic year.

Ministry spokesman Top Sopheak said the construction of the first vocational school for tourism is of great importance in the training of human resources, and plays a vital role in developing tourist skills to boost the sector in Cambodia.

“This school will make a significant contribution to tourism, in particular by providing opportunities for young people and the next generation who wish to learn skills for the tourism sector,” said Sopheak, who is also secretary of state at the ministry.

The school will run one to two year training courses for developing capacity levels to improve the tourism industry, he added.

The French Development Agency (AFD) has provided €11 million (around US$11.5 million) in loans for the vocational school construction projects in Phnom Penh and Preah Sihanouk province, and €1.5 million in grants to strengthen the Tourism Commercial Capacity Building Programme. 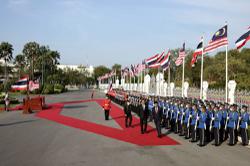