BANDAR SERI BEGAWAN (Borneo Bulletin/Asia News Network): Some of the drawings of war showcased in the exhibition took place many decades ago are shockingly similar to present day war. Places differ, enemies change but the children, remain as victims, said Honorary Consul of the Embassy Poland in Brunei Darussalam Bogusia Mischke.

She said this during the common Polish-Ukrainian archival project held in conjunction with the 25th anniversary of the establishment of diplomatic relations between Poland and Brunei, the Embassy of the Republic of Poland in Kuala Lumpur in collaboration with Laksamana College of Business on Tuesday.

Mischke shared that the event is titled 1939-45 Poland/2022 Ukraine Polish-Ukrainian Exhibition Mom I Do Not Want War!.

The event also saw a brief speech by Ambassador of Poland to Kuala Lumpur and Brunei Darussalam Dr Krzysztof Debnicki and a Polish poem recital titled You Who Wronged a Simple Man by Polish poet and Nobel Prize winner Czeslaw Milosz recited by Dayangku Nur Nadhrah binti Pengiran Haji Shaifulrizal prior to the official unveiling and ribbon cutting of the exhibition by the ambassador.

Showcasing drawings of Polish children from 1946 in the Central Archives of Modern Records in Warsaw and contemporary drawings of Ukrainian children related to the war currently taking place in Ukraine, the artworks are collected on the Mom, I see War portal.

The exhibition presents moving testimonies of war – from historical drawings of Polish children from 1946, a record of their experiences during World War II and the German occupation of 1939-1945, and contemporary drawings of Ukrainian children, related to the war taking place in Ukraine.

The aim of the exhibition is to portray that war always looks the same through the eyes of a child. Irrespective of place and time, war is a huge evil, and the child will always end up as the victim. Permanent Secretary at the Ministry of Foreign Affairs Pengiran Norhashimah Pengiran Mohd Hassan, Rosimah Sumaimah Matassim from the Brunei Darussalam National Accreditation Council at the Ministry of Education, as well as members of the Diplomatic Corps were present. 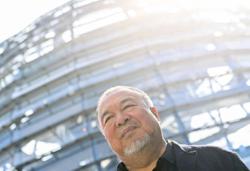