SINGAPORE, Nov 5 (The Straits Times/ANN): When Madam Mabel Chia, 40, buys threadfin at the Bukit Timah Market, she used to get one big enough to feed her family of six.

These days, she has had to cast around for something more affordable but smaller. Pointing to another fish which was bigger on Saturday, she said: “I used to be able to get something around this size, but it’s too expensive so I have to choose the smaller one.

“My father prefers to eat less meat, and wants to eat more fish because it’s healthier and softer for him to chew, so I don’t really have much choice. I’ll probably cook another vegetable dish to make up for the smaller portion.”

The early arrival of this year’s monsoon season, coupled with rising fuel and labour costs, has pushed up the price of fish and seafood from Malaysia by some 20 per cent.

The Straits Times spoke to fishmongers in Tekka Market, Bukit Timah Market and Toa Payoh, who all said that in the last two months they had experienced suppliers’ price hikes of 10 to 20 per cent.

A 32-year veteran of the trade, he added that the red grouper he sells would cost around $19 per kg but the price has since risen to $24 per kg. “I’ve maintained my price so that my customers can still afford to buy it but it means my profits are also down.”

Adding to his woes is the manpower crunch, which means that he has had to look elsewhere for workers.

“There are fewer workers who want to work in this industry, so they can demand higher pay. This all adds up to the cost of the fish when it reaches us,” said Mr Lee.

Madam Lina Wong, 50, who runs Song Yu Ji Seafood at the Bukit Timah Market with her husband, said: “I’ve seen the prices of some fish go up by as much as 50 per cent. In those cases, we won’t buy it when we go to the fishery port, because there’s no one who will buy it from us.”

She added that her stall has kept the price of the Emperor red snappers at $25 per kg even though the cost has gone up, in a bid to retain customers. 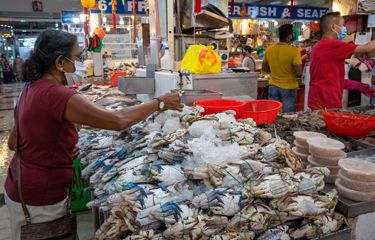 “It’s normal for the price to fluctuate, because the supply of wild caught fish is never stable,” said Madam Wong. “Prices normally rise towards the end of the year and before Chinese New Year and go down right after but I think it will be much more than normal this time because of how soon Chinese New Year is.”

Chinese New Year will be celebrated in January in 2023.

Fishmonger Lim Huat, 69, who runs a stall at the Toa Payoh Lorong 8 Market and Food Centre, said prices have been steadily creeping up since the start of the year, with red snapper costing him around $16 per kg now, compared to $9 per kg previously. The price of grey prawns has since risen by two dollars to $13 per kg.

“It’s hard to sell some of the fish to my customers, especially since most of them are elderly like myself. Sometimes, I’ll just give away whatever small amount I have left, or accept whatever they are able to pay,” he added.

Mr Jeffrey Tan, who runs fish merchant Dish The Fish, echoes the view that the increase in prices is not a recent phenomenon.

The 37-year-old said: “Prices have increased anywhere from 25 per cent to 30 per cent over the last few years due to the hike in oil prices which increases delivery costs.

“Farmed fish now costs slightly higher due to the cost of feed and logistics but the increase for wild-caught seafood is much higher as the supply is limited.”

Founder of local farm The Fish Farmer, Mr Malcolm Ong, said the supply-driven price hikes of wild-caught fish means that he is seeing an earlier than usual spike in the demand of his fish.

He added: “The monsoon affects the supply of fish because the fishermen won’t go out to sea on their boats, but this does not affect the fish in our farms. So because this supply (of wild caught fish) is affected, customers will have to pivot towards sourcing their fish from us or buy more regularly from the supermarkets which we supply to.”

He has kept prices the same despite the greater demand.

Mr Ong pointed out another often unforeseen factor which contributes to the increase in prices during the festive period.

He said: “The drivers, who deliver the seafood, often take this time off to return to their homes to celebrate the new year with their families. When that happens, the supply is affected and, consequently, your fish becomes more expensive.”

The ST also reached out to the Seafood Industries Association Singapore for comment but did not receive a reply. - The Straits Times/ANN