BEIJING: For many in China, years of gruelling lockdowns and privacy invasions aimed at extinguishing Covid-19 have caused misery.

For President Xi Jinping, the virus curbs are a triumph.

His zero-tolerance approach to Covid-19 has become synonymous with the efforts to cement his authority over China and its ruling Communist Party (CCP).

The endgame begins on Oct 16, when thousands of party delegates will gather in Beijing for a major party congress at which he is expected to secure a historic third term.

“Xi’s legacy and the legitimacy of the CCP are bound to the success of the zero-Covid campaign,” Diana Fu, an expert on Chinese domestic politics at the Brookings Institution think tank, told AFP.

While the rest of the world has largely moved to live with Covid-19, Xi has insisted on draconian policies aimed at eliminating the virus.

The approach has crippled growth in the world’s second largest economy, which was already struggling with a debt-laden property sector and high youth unemployment.

But Xi has dug in his heels, declaring zero-Covid China’s most “economic and effective” path forward, while maintaining policies that have deepened the state’s control over the lives of its 1.4 billion people.

The headline-grabbing planks of the campaign continue to be the snap lockdowns – sometimes confining tens of millions of people to their homes for weeks or months.

In one of the recent shutdowns, some residents in the megacity of Chengdu were not allowed to go outside even when an earthquake shook their apartment buildings.

And in the economic hub of Shanghai, a months-long lockdown led to rare scenes of protests from middle-class and wealthy Chinese.

Public frustration has also pushed past China’s internet censors and onto social media.

In one of the highest-profile cases, a bus crash in rural Guizhou province that killed 27 people on the way to a Covid-19 quarantine facility sparked a surge of online criticism.

General curbs that erode privacy and limit movement have also caused anger and resentment.Residents in many cities must obtain a negative coronavirus test every few days to gain access to public spaces. They then use their smartphones to scan QR codes at entrances to offices, malls and restaurants and bring up their latest test results.

A green icon indicates they are free to enter, while red or amber means they may have, respectively, tested positive or passed near someone who has.

That could lead to anything from a few days of home isolation to weeks at a quarantine facility.

The system also tracks people’s movements, leaving it open to abuse, such as when authorities were accused of thwarting anti-corruption protests this year by turning participants’ codes red.

Before the pandemic, China’s citizens were already under heavy surveillance.

Steve Tsang, director of the SOAS China Institute at the University of London, said the Covid-19 monitoring apparatus was “in line with the model of social control” spearheaded by Xi.

China argues zero-Covid places human life above material concerns and has helped to avert the public health crises seen in other countries. 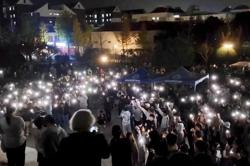 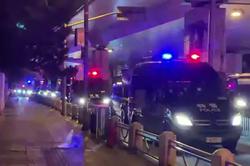