BANGKOK (The Nation/Asia News Network): The massacre in a Nong Bua Lamphu nursery has raised an important question: How effective are gun controls in Thailand?

The attack on Thursday at a local nursery for preschool children, which left 38 dead and 12 injured including the gunman and his family, is the third such incident in recent years.

The last such mass killings took place in early 2020 in Lopburi and Nakhon Ratchasima provinces.

Most critics are pointing to the enforcement of the 1947 Firearms, Ammunition, Explosives, Fireworks and Imitation Guns Act, and in the latest massacre, the fact that the perpetrator was a former police officer.

The law, which has been amended nine times, aims to control the use of firearms as well as owners, users, gun dealerships and authorised officials.

As per the legislation, gun ownership is banned for former convicts, drug abusers, frail or disabled persons, mentally unsound or infirm persons, incompetent or semi-competent persons and minors.

Unemployed persons or those with no income or fixed place of residence, as well as those convicted of public-order offences are also not allowed to own guns.

Gun shops are required to renew their permits annually and are allowed to procure or import a maximum of 30 pistols and 50 rifles per year.

Gun ownership in Thailand is the highest in South-East Asia and the 13th highest in the world, as per the independent Geneva-based Small Arms Survey.

As per the 2022 Gun Deaths by Country report, Thailand had the third highest number of gun-related crimes in Asia in 2019 after Iraq and the Philippines. 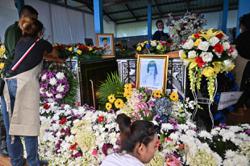