The government attempts to stabilise exchange rates to minimise impacts on economy. - VT

“The gap between the official and parallel foreign exchange markets was 38.6 per cent by mid-June, but it narrowed to an average of 15.9 per cent in August,” stated the update of ADB’s flagship publication, Asian Development Outlook (ADO) 2022.

The government attempts to stabilise exchange rates to minimise impacts on the economy.

The continuing depreciation of the kip is linked to a supply-demand mismatch of foreign currencies, ramping up pressure on importers and driving up inflation.

The currency devaluation is having a damaging effect on the Lao economy, driving up the price of products and creating more hardship for the poor.

According to the ADB, the year-on-year inflation rate in August was at a 22-year high of 30 per cent. The rate averaged 15.5 per cent in the first eight months of this year.

Administered prices for fuel were increased 13 times from January to September, resulting in a 90.3 per cent rise in diesel prices and a 62.3 per cent increase in gasoline prices.

Rising inflation and the country’s high public debt ramped up economic and financial pressure for Laos.

In response, the Lao government, in June, increased the availability of foreign exchange for fuel importers and issued letters of credit to shore up fuel supplies.

The Bank of the Lao PDR issued savings bonds worth 5 trillion kip, the equivalent of 3 per cent of money supply, to reduce excessive liquidity in the economy and shore up demand for the kip.

Laos imports more than it exports, which drives up the need for foreign currencies to buy imported goods.

In August alone, Laos registered a record trade deficit of US$166 million, up from US$114 million in July, according to the Lao Trade Portal.

The value of two-way trade between Laos and other countries was valued at US$1.02 billion, excluding the export of electricity.

The price rise is linked to the Russia-Ukraine conflict, which saw households trimming daily consumption spending, affecting output growth. Sharp increases in the price of fertiliser, animal feed, food and fuel discouraged farmers and producers from expanding their operations.

According to the ADB report, foreign direct investment inflows halved to US$280 million in the first half of this year amid slower growth in Laos’ trading partners, constraining the contribution of fixed investment to growth. 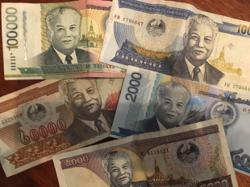