Kem Sokha greets his supporters as he leaves the Phnom Penh Municipal Court on Oct 05. - PPP

Korm was among five other witnesses who testified at the hearing against the former CNRP leader, who has been charged with conspiring with foreign powers to overthrow the government.

They included Chak Sopheap, who is currently executive director of the Cambodian Centre for Human Rights (CCHR), and Chhim Phalvarun – a former CCHR staff member back when Sokha founded and led the organisation before forming the then Human Rights Party (HRP) – who is now a senior government official. The three others are former CNRP officials.

Municipal court spokesman Plang Sophal told The Post that only Korm was questioned due to time constraint, adding that the hearing would resume next week.

Korm – who has now been made a “supreme adviser” to the Candlelight Party (CP) following a merger between the CP and the Khmer Will Party (KWP), where he served as honorary president – told The Post that the court questioned him about his political background, the CNRP’s involvement with several US NGOs and also about the merger between the long-defunct Sam Rainsy Party and the HRP.

He said he was also asked about demonstrations held in Freedom Park in Phnom Penh after the 2013 general election.

“This morning’s hearing was prolonged, and the participants seemed tired. The trial chamber was prepared to continue in the afternoon, but the plaintiffs’ lawyers were unavailable. This means the hearing is delayed until Oct 12,” he said.

Korm added that he is willing to continue to appear as a witness if summoned by the court, provided his health and schedule allows it.

Hun Kosal, a close acquaintance of Sokha, told reporters that Korm’s answers at the hearing seemed confusing and his memories did not seem clear, and that his answers were not in line with the CNRP’s principles.

Yi Soksan, an official at rights group ADHOC who was present at the hearing, agreed that Korm’s answers seemed unclear, noting that many questions were repeated.

“The court summoned six witnesses to testify, but still spent time questioning the accused. It did not seem like the court valued the witnesses’ time,” he said.

Sopheap of the CCHR said she waited from 8am until noon in the witness room but was never called to the stand.

“I sacrificed my time and cancelled an overseas mission for nothing. The court should have carried proceedings over to the afternoon so as not to waste the witnesses’ time,” she said.

Court spokesman Sophal explained that one of the government lawyers had a prior engagement, hinting that questioning may continue into the afternoon at next week’s hearing should more time be required. 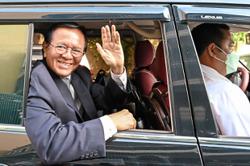