Japan has been among the last major democracies to reopen its embassy in Kyiv. - SCREENGRAB FROM GOOGLE MAPS

TOKYO (Bloomberg): Japan plans to reopen its embassy in Kyiv on Wednesday (Oct 5), seven months after it was closed, Kyodo News reported, citing a source familiar with the matter that it did not identify.

Japan has been among the last major democracies to reopen its embassy in the Ukrainian capital after shutting down its operations and moving diplomatic staff elsewhere at the start of the invasion last February.

The staff was first sent to Lviv in western Ukraine, then out of the country. 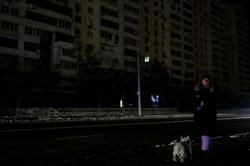