A deadly stampede at the Kanjuruhan Stadium left 125 people dead after police fired tear gas in an attempt to disperse unruly fans. - AFP

The committee fined the Malang-based soccer club Rp 250 million (US$16,400) despite public calls for PSSI members, including chairman Mochammad Iriawan, to also take responsibility for the disaster and resign.

Aside from the fine, PSSI also barred Arema from playing at their home ground for the rest of the Liga 1 season. “

From our meeting regarding Arema and the organisers, we decided to ban them from playing in their home base in Malang,” PSSI disciplinary committee head Erwin Tobing told a press conference on Tuesday afternoon.

“Any matches with Arema as the home team must be held at a stadium at least 250km away from Malang.”

Currently, Arema plays its home games in the Kanjuruhan Stadium, including in the team’s 3-2 defeat to longtime rival Persebaya Surabaya that resulted in a deadly stampede that left 125 people dead after police fired tear gas in an attempt to disperse unruly fans.

The PSSI disciplinary committee also punished two Arema officials deemed to be responsible for the incident.

Arema’s head of executive committee Abdul Haris and head of security Seko Sutrisno have been given lifetime bans from Indonesian soccer, effective immediately.

“[Abdul] was responsible for ensuring the safety of the event. He had to anticipate every possible outcome, which he failed to do,” Erwin said. He cited the locked gates, which partly caused the pile-up and asphyxiation of many of the victims, as evidence of Abdul’s negligence.

As a disciplinary committee, Erwin noted that he had no authority to press criminal charges, which is in the realm of the police. Crucially, the committee’s decision absolves the PSSI of any responsibility so far, despite repeated calls for members of the soccer governing body to resign.

The PSSI’s actions are in line with the National Police, who have so far punished only police officers who were on duty during the stampede.

The highest-ranking officer to be punished is Adj. Sr. Comr. Ferli Hidayat who has been removed from his post as Malang Police chief and transferred to the human resources division of the National Police, while senior officials from the National Police have so far escaped unscathed.

This decision is the exact scenario that Madura United president Achsanul Qosasi warned about on Sunday.

“Don’t shift blame only to [Arema], as if the responsibility is limited to those who organisd the match in Malang,” Achsanul said on Twitter.

He added that the PSSI should not be in charge of any investigation and the authority should be given to the Youth and Sports Ministry or the National Sports Council (KONI).

As a sign of respect to the victims and their loved ones, Achsanul encouraged the entire PSSI management to resign from their posts.

Speaking to kompas.tv on Sunday, he also encouraged the government to “form a fact-finding team and reveal the parties responsible for the disaster and review the security procedures used in the match”.

The team, led by Mahfud himself, consists of several academics, observers of the local soccer scene, journalists and the military.

“Hopefully, we can finish our investigation in the next two to three weeks,” Mahfud said on Monday.

Doubling down on their criticism of the PSSI, several analysts are also calling for world soccer's governing body FIFA to hand down sanctions to the PSSI, citing a lack of trust.

Politician Akbar Faizal of the NasDem party pleaded for FIFA to punish the PSSI, describing them as amateurs, and to revoke Indonesia’s status as the host of the 2023 U-20 World Cup.

After winning the bid in 2019, Indonesia was originally set to host the 2021 FIFA U-20 World Cup, which was eventually pushed back to 2023 due to the coronavirus pandemic.

In September, Youth and Sports Minister Zainudin Amali reaffirmed the country’s readiness to host the tournament, which is now in jeopardy given the tragedy. Ahmad Riyadh of the PSSI said that they had been in contact with both FIFA and the Asian Football Confederation (AFC) and that representatives from both governing bodies would visit Indonesia at an unspecified date.

“Hopefully, FIFA can see how the government has responded to the tragedy and realise that this is the fault of several bad apples and that both the government and the police have reacted quickly in handling the case,” Ahmad said. 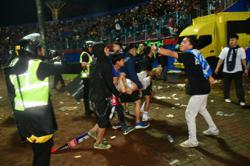