BEIJING (China Daily/Asia News Network): With the 2022 FIFA World Cup approaching, Chinese companies are rushing to fill their shipping containers with goods ranging from soccer balls and toys to virtual reality helmets for the event, which will be held in Qatar in November and December.

The tournament, held every four years, has boosted the growth of the global sports economy by creating business opportunities for export-oriented companies.

Orders for products related to the grand event, which is scheduled to be held from Nov 20 to Dec 18, flowed into Yiwu, Zhejiang province, the world's largest small-commodity distribution centre, since April, according to local exporters.

The Yiwu Sporting Goods Association estimated that the city accounts for about 70 per cent of the World Cup's peripheral goods market this year, providing items from whistles to themed mugs and pillows.

"We are in the final stage of exporting World Cup-related soccer balls. All the goods will be shipped to Qatar by the end of this month," said Wu Xiaoming, board chairman of Yiwu Aokai Sports Goods Co, an authorised soccer manufacturer for the World Cup that has a production capacity of 800 soccer balls a day.

He said the third quarter is usually a quiet period in the city for exports of small commodities, but the World Cup turned it into a busy season this year. The company saw its soccer ball exports jump 70 per cent year-on-year between July and September.

Chen Xianchun, a sales manager at Yiwu Jinzun Stationery Co, which produces sports trophies, medals and keychains, said her company's overseas orders, mainly placed by clients in the Netherlands, Germany and the Republic of Korea, surged nearly 50 per cent year-on-year in the third quarter.

"Even though the Covid-19 pandemic affected retail and factory businesses in Yiwu in early August for a short time, this has pushed exporters in the Yiwu International Trade Market to expand their proportion of online sales," said Chen, who added that her company has completed all the orders related to the World Cup.

"Many customers have contacted us online. Product materials and styles can be shown to them through livestreaming," she said.

"Our workload has increased, and sales went up and overseas demand remains strong."

Thanks to the growing demand prompted by the World Cup, companies in Yiwu exported 3.82 billion yuan (US$537 million) worth of sporting goods and 9.66 billion yuan of toys in the first eight months of 2022, according to data from Yiwu Customs, a branch of Hangzhou Customs.

Meanwhile, the city's exports to Spain increased by 95.8 per cent year-on-year, to Argentina by 67.2 per cent and to Brazil by 56.7 per cent, according to customs statistics. All three nations are among those sending teams to Qatar.

Eager to ship scarves, trumpets, stickers and other sports products to Qatar as quickly as possible, the city opened the Qatar World Cup shipping line in mid-September.

Its products, departing from the Ningbo-Zhoushan and Shanghai ports, can be shipped directly to Hamad Port in Qatar within 20 to 25 days.

For instance, China's exports of liquid crystal display televisions grew by 16.8 per cent year-on-year to 61.13 million units in the first eight months of 2022, data from the General Administration of Customs showed. 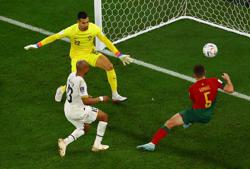