TAIPEI: Taiwan launched its first English-language news, lifestyle and entertainment television channel to give it a bigger voice internationally.

The government-backed TaiwanPlus began operations last year as a mostly online streaming platform and has been strongly supported by President Tsai Ing-wen.

Speaking at the launch ceremony yesterday, Tsai said the channel has already raised Taiwan’s international profile and would help as the island forges ever closer ties with “countries that share our core values of freedom and democracy”.

“The stories of Taiwan should be shared with the world,” she said.

“With more and more people around the world taking an interest in Taiwan it is more important than ever that we have a platform to bring Taiwan to the international community.”

China, which claims democratically governed Taiwan as its own territory, is increasingly active in English-language media, conveying the ruling Communist Party’s views to an outside audience, especially via the state television’s English-language news channel China Global Television Network, or CGTN.China is also pressuring Taiwan’s international space, including forcing foreign companies to refer to it as being part of China on their websites and routinely carrying out military drills near the island.

Culture Minister Lee Yung-te told reporters that Taiwan needed to be able to combat what China says about the island and put the Taiwanese viewpoint out.

“Internationally our voice has not been fully heard. China continually disseminates that Taiwan is part of China, and lots of people believe that. You tell them that’s not the case, and they ask, why?” Lee added.

“So in the future we’ll be using Taiwan’s own media to explain to the international community why that’s not so.”

The television channel is so far only available in Taiwan, but Lee said they were eyeing launching in the United States in the next six months.

Taiwan already has a handful of domestic English-language media, the most prominent of which is the newspaper Taipei Times, founded in 1999 and published by the mass circulation Liberty Times. — Reuters 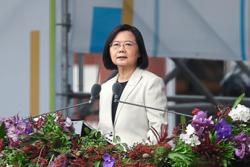