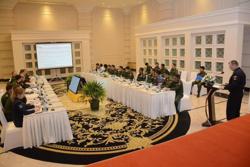 The government will instead invite a non-political representative from Myanmar to attend.

The move comes as Myanmar has shown a lack of real progress in implementing the Asean five-point consensus (5PC) and its pursuit of openly provocative policies such as the execution of pro-democracy activists.

Chum Sunry, a spokesman for the Ministry of Foreign Affairs and International Cooperation, confirmed the exclusion of the Myanmar military leader from the summit.

“We have sent out invitations to all Asean member states but Myanmar ... and to the Asean General Secretariat, our Asean Dialogue Partners and some regional and international organisations. We have suggested that Myanmar send only a non-political representative,” he told The Post.

Thong Mengdavid, a research fellow at the Mekong Centre for Strategic Studies at the Asian Vision Institute, opined that Cambodia as the chair of Asean may not want to appear to support Myanmar's military leaders or abandon civil society and opposition movement.

He said non-interference in Myanmar's internal political affairs is in line with the Asean Central Principles.

“Despite the slowness in resolving Myanmar's political crisis, Cambodia and other Asean members have focused their attention and stepped up their efforts to provide humanitarian assistance, such as Covid-19 vaccines, food and medicines, and to seek greater protection and safety for the people of Myanmar.

“Myanmar's military leaders and the ethnic armed organisations or militias should stop attacking each other and return to the negotiating table to find a win-win political solution, such as military or political concessions to ensure the safety of the people and a return to democratic elections," he told The Post on Oct 3.