A toast: Xi and Li raising glasses during a reception at the Great Hall of the People in Beijing. — Reuters

AS the Communist Party of China prepares for its 20th National Congress in October, where President Xi Jinping is expected to secure a controversial third term as top leader, Asian Insider looks at his record over the last 10 years and what the future holds for him, the party and the country.

Last weekend, Twitter was abuzz with “news” that there had been a military coup in Beijing and President Xi Jinping was under house arrest.

The grist to the rumour mill: Hundreds of flights had been cancelled across the country, Xi had not been seen in public for a week, and a video showing a military convoy making its way into the capital city was being widely circulated.

Unsubstantiated claims and conspiracy theories about Chinese leaders’ fall and demise come and go with enough regularity to make the most seasoned China watchers roll their eyes every time one of them pops up on social media.

The 101-year-old Communist Party of China swept to power 73 years ago on Saturday, but it is still one of the world’s most opaque political parties.

As it gears up for its twice-a-decade congress in two weeks, where nearly 2,300 delegates will elect a new Central Committee made up of 370 or so leaders, it is keeping political pundits guessing over who might rise in the ranks to lead the country of 1.4 billion people.

The Politburo Standing Committee – the pinnacle of power with seven men – and the wider Politburo of 18 other leaders will be of particular interest to most.

But compounding the difficulty in making any predictions is President Xi Jinping’s track record of breaking norms – whether written or unwritten – and the cloak of secrecy that has only thickened under his rule.

Only two things appear to be certain for now: President Xi will secure a rare third five-year term as party and military chief during the week-long gathering. And there will be no apparent successor.

But who else might stand alongside Xi when the new team takes the stage a day after the conclave? Here are three possible scenarios:

Most conservativeTwo of the seven standing committee members will step down, in keeping with an unwritten retirement rule that requires Li Zhanshu, 72, and Han Zheng, 68, to relinquish their third-ranked and seventh-ranked seats.

The “seven up, eight down” rule sets at 67 the age limit for old and new members of the standing committee and the Politburo at the start of a new term. Politicians aged 68 or older are disqualified.

But the rule does not apply to Xi, 69, who is looking to seek a third term in office.

Conventional wisdom has it that Premier Li Keqiang, 67, will retain his second-ranked seat in the standing committee because he has not reached the retirement age. But he is constitutionally required to step down as premier in 2023 after two five-year terms and could take over Li Zhanshu’s role as head of Parliament.

Wang Yang, 67, who is chairman of Parliament’s top advisory body, is the frontrunner to succeed Li Keqiang as premier in 2023. As far as seniority goes, Wang should be next in line for the prime minister’s job.

Tradition also dictates that only those who have been vice-premiers and are capable of managing the economy can be appointed premier. Wang was vice-premier between 2013 and 2018, overseeing commerce, among other things.

Current standing committee members who have yet to reach retirement age could stay on. Zhao Leji, 65, currently ranked sixth, could take Wang’s fourth-ranked seat and become chairman of the advisory body in 2023.

Wang Huning, 67 in October, is expected to retain his fifth-ranked seat as the party’s top ideologist.

Party insiders have singled out Hu Chunhua, 59, and Ding Xuexiang, 60, as the two likely new faces in the standing committee.

Hu, currently the third-ranked vice-premier and who was thought to have been groomed for the top job during the leadership reshuffle at the last congress, is tipped to become executive vice-premier.

Ding, director of the party’s General Office, is the frontrunner among the President’s men to be promoted to the standing committee. He is Xi’s most trusted aide among the younger leaders.

But this scenario could well be too unimaginative for Xi, who has a penchant for departing from tradition and surprising pundits.

In the second scenario, Premier Li will retire from the standing committee this year and as premier next year, according to several party insiders and observers.

Three other standing committee members will also step down: Li Zhanshu and Han – in accordance with the retirement rule – and Wang Huning, who was said to have indicated privately that he would like to retire earlier.

Only three of the seven standing committee members will retain their seats: President Xi, Wang Yang and Zhao.

The four other standing committee members will be newcomers and mostly the President’s men.

Regardless of whether Premier Li stays on or not, the number of standing committee members could be expanded to nine to accommodate more of the President’s allies and possibly a People’s Liberation Army (PLA) general for the first time since 1992 – a hint that China might be preparing itself for military conflict.

If so, the person who fits the bill is PLA Ground Force General Zhang Youxia, 72, one of two incumbent Central Military Commission vice-chairmen, and who has combat experience from the 1979 border conflict between China and Vietnam.Most boldIn this scenario, President Xi will be the only standing committee member to hold on to his seat – a clear sign of his iron grip on power.

This could be done if the unwritten retirement age rule is revised down instead of up.

“It will be ‘winner takes all’,” said Ho Pin, who runs Mirror Media Group, a Chinese-language publishing company in New York.

“There will still be norms, but no more factions,” said Ho, who correctly predicted the standing committee line-ups of the 16th to 19th party congresses from 2002 to 2017.

Factional balance of power has always been a major factor in the composition of the standing committee to keep the unity and stability of the party.

Even so, these factional lines are also not so clear-cut. Zhao, for instance, is also known as Jiang’s man, while Wang is also not as entrenched within the elite circles of the youth league.

Wang Huning is the exception as he was trusted by and has worked with all three leaders.

If Xi’s hold on power is as unwavering as it looks to be, this scenario could well pan out, and he will have free rein to fill the standing committee with younger allies, such as those born in the 1960s. — The Straits Times/ANN 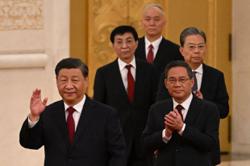