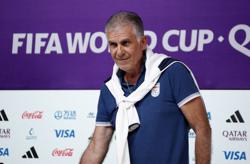 This picture taken on October 1, 2022 shows police holding tear gas guns and gesturing at the crowd after a football match between Arema FC and Persebaya at the Kanjuruhan stadium in Malang, East Java. Anger against police mounted in Indonesia on Monday (Oct 3, 2022) after at least 125 people were killed in one of the deadliest disasters in the history of football, when officers fired tear gas in a packed stadium, triggering a stampede. - AFP

SEOUL, South Korea (AP): Gaining the right to host next year’s Under-20 World Cup was a major milestone in Indonesia’s soccer development, raising hopes that a successful tournament would turn around long-standing problems that have blighted the sport in this country of 277 million people.

The death of at least 125 people at a league game between host Arema FC of East Java’s Malang city and Persebaya Surabaya on Saturday is a tragic reminder, however, that Indonesia is one of the most dangerous countries in which to attend a game.

"Do remember that the FIFA U-20 World Cup will be the worldwide spotlight since the event will be joined by 24 countries from five continents,” Indonesia’s President Joko Widodo said last month as he pushed for thorough preparations for the tournament.

Since Saturday, the domestic league has been suspended. Widodo has ordered the sports minister, the national police chief and the soccer federation to conduct a thorough investigation into the deadly stadium crush.

Indonesia was the first Asian team ever to play at a World Cup - participating in 1938 as Dutch East Indies - but despite an undoubted national passion for the sport, it has never returned to the global stage because of years of corruption, violence and mismanagement.

Data from Indonesia’s soccer watchdog, Save Our Soccer, showed 78 people have died in game-related incidents over the past 28 years.

Those accused are often associated with supporter groups that attach themselves to clubs, with the biggest boasting hundreds of thousands of members.

Arema's intense rivalry with Surabaya meant that no visiting fans were allowed in the stadium on the weekend. Yet violence broke out when the home team lost 3-2 and some of the 42,000 Arema fans, known as "Aremania,” threw bottles and other objects at players and soccer officials.

Restrictions on visiting fans also have failed in the past. In 2016, despite Persib Bandung supporters being banned from a game with bitter rival Persija Jakarta, they were blamed for the death of a Jakarta supporter. 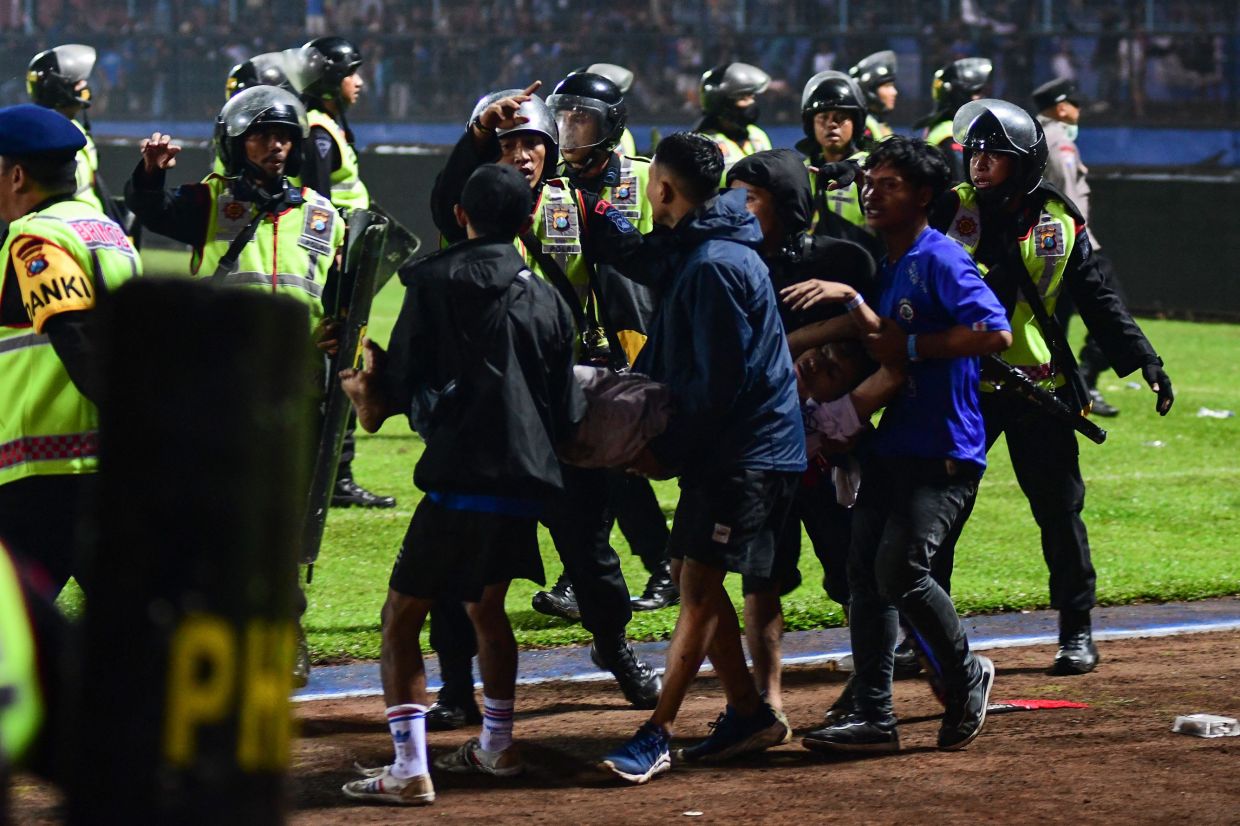 Police gesturing at people carrying an injured man after a football match between Arema FC and Persebaya at the Kanjuruhan stadium in Malang, East Java. - AFP

A month earlier, a Persib fan had been beaten to death by Jakarta followers.

Soccer fans have accused security officials of being heavy-handed in the past and on the weekend, with witnesses describing officers beating them with sticks and shields before shooting tear gas canisters directly into the crowds. In 2016, police were accused of killing 16-year-old supporter Muhammad Fahreza at a game between Persija and Persela Lamongan, resulting in mass demonstrations demanding an end to police brutality.

"The police who were in charge of security violated FIFA stadium safety and security regulations,” soccer analyst Akmal Marhali told Indonesian media on Sunday, referring to the use of tear gas on Malang fans who entered the pitch after their team's defeat. That sparked a rush for exits in an overcrowded stadium.

"The Indonesia Football Association may have been negligent for not informing the police that security procedures at a football match are not the same as those at a demonstration."

FIFA, soccer’s world governing body, advises against the use of tear gas at stadiums by on-field security or police who control and have responsibility for safety operations.

In 2007, Nurdin Halid was imprisoned on corruption charges but was able to continue as the organization’s president until 2011. After Halid was banned from running for another term, a rival league, federation and national team emerged.

But chaotic administration continued until FIFA suspended Indonesia in 2015, a sanction that was lifted the following year.

In 2019, when FIFA awarded Indonesia hosting rights for the Under-20 World Cup, it was seen as a vote of confidence.

In June, a FIFA panel inspected the country's soccer facilities and planning for the May 20-June 11 tournament and proclaimed its satisfaction.

"We are very pleased to see the preparations in Indonesia,” Roberto Grassi, Head of Youth Tournaments for FIFA said. "A lot of refurbishment work has been done already. We have had an encouraging visit and are confident of support from all stakeholders involved.”

Kanjuruhan Stadium, the site of the disaster on Saturday, is not among the six venues listed for the Under-20 World Cup, although nearby Surabaya Stadium is scheduled to host games.

FIFA has not yet commented on any potential impact on the Under-20 World Cup but the weekend tragedy is likely to damage Indonesia's bid to host the 2023 Asian Cup. It is vying with South Korea and Qatar to become host of the continental championship after China relinquished its staging rights in May.

Indonesia has already co-hosted the tournament, sharing the event in 2007 with Thailand, Malaysia and Vietnam and hosting the final in Jakarta, where Iraq beat Saudi Arabia for the title.

That was the last time Indonesia staged a major international soccer tournament. The Asian Football Confederation is expected to announce its decision on the 2023 tournament on Oct. 17.

There is unlikely to be any soccer played before then as people in Indonesia, and football followers around the globe, come to terms with one of the deadliest disasters ever at a sporting event.

Families and friends of some of the people who died after the match wailed in grief as the bodies of the victims were returned home Monday. Seventeen children were among the dead.

___ Duerden covers soccer in Asia for The Associated Press.