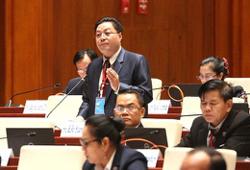 VIENTIANE, Oct 2 (Vientiane Times/ANN): Germany has pledged additional support to Laos of about 38 million Euro in the coming years, following the resumption of bilateral cooperation between the two countries, according to a top German government official.

“I am here to discuss with the Lao government our future cooperation. In this context I am happy to pledge additional 38 million Euro [for Lao-German bilateral cooperation],” the State Secretary for Economic Cooperation and Development, Jochen Flasbarth, said in an interview with the Vientiane Times at the German Embassy in Vientiane.

Flasbarth, who is responsible for taking international development cooperation decisions, made an official visit to Laos last week to cement the new phase of Lao-German bilateral cooperation, which was officially reinstalled in June this year.

While in Vientiane, Flasbarth met with Deputy Prime Minister and Minister of Foreign Affairs, Saleumxay Kommasith, and senior officials from the Ministry of Planning and Investment, Ministry of Public Works and Transport, Ministry of Education and Sports and the Ministry of Agriculture and Forestry to discuss the new bilateral cooperation.

Flasbarth said the decision by the German government to resume bilateral cooperation was based on his government’s new global agenda, which aims to support the international community to achieve the UN Sustainable Development Goals.

In the Lao context, he said that the newly announced support would be spent on proven bilateral cooperation projects, such as forest management and infrastructure development in rural areas. The new intervention would further help rural communities in Laos gain better access to markets, education, and health care services, he added.

“The best thing to do now is to build up on what we have,” Flasbarth said, adding that the upcoming phase of bilateral cooperation would enable Laos and Germany to explore new areas of cooperation for the mutual benefit of both countries.

When asked what needed to be done to increase bilateral trade and German investment in Laos, Flasbarth said the German government was not in a position to order the private sector to invest in particular countries, adding that, generally, the private sector only invests in countries that can provide them with good returns on their investments.

He said the transformation of Laos from a landlocked country to a regional land bridge would help to improve Laos’ competitive advantage.

However what investors need the most is not only good infrastructure but also good governance and favourable investment policies, together with effective legal enforcement, he added.

Laos and Germany started diplomatic relations in 1958 and bilateral cooperation in 1963. So far, Germany has provided more than 560 million Euro development support to Laos.

The value of bilateral trade between Laos and Germany to date stands at about 159 million Europe. Germany has also provided a number of scholarships for Lao nationals. About 3,000 people have been educated and trained in German. - Vientiane Times/ANN