HANOI, Sept 30 (Bernama): Vietnam received about 1.87 million international arrivals in the first nine months of this year, 16.4 times higher than the same period last year but much lower than that in the same time in 2019 before Covid-19 broke out, according to the General Statistics Office (GSO).

It reported that recently, the Vietnam National Administration of Tourism (VNAT) has coordinated with the social media network TikTok and the Vietnam Tourism Association to introduce launch "Ngan nga Vietnam,” which calls on users to discover the beauty of traditional music, celebrate culture and share national pride, thereby contributing to promoting Vietnam tourism. - Bernama 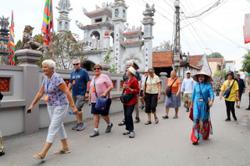