F1 drivers prepare for Singapore heat at the sauna

Carlos Sainz shared a clip of himself pedalling away on an indoor bike seemingly located inside a steam room. - CARLOS SAINZ/INSTAGRAM

SINGAPORE (The Straits Times/Asia News Network): The Formula One Singapore Airlines Singapore Grand Prix revs back into town this weekend from Friday to Sunday (Sept 30-Oct 2), with many drivers bracing themselves for the tight corners and twisty bends of the Marina Bay Street Circuit.

And there is one other thing they have been preparing themselves for – Singapore’s equatorial heat and humidity.

At a closed-door media event on Wednesday, which was hosted by luxury watch brand Richard Mille, Ferrari’s Charles Leclerc shared the unexpected way that he had readying for this part of the Singapore Grand Prix: by sweating it out in the sauna.

“This is the track we have to think about and prepare for. We’ve been spending a lot of time in saunas, even during the summer, at very high temperatures,” said the 24-year-old, who hails from Monaco.

Former F1 driver Felipe Massa, who was also at the event, concurred that such high-temperature training was essential to surviving the Singapore Grand Prix.

“It’s an amazing track to drive, but the heat and humidity, combined with the way the track is laid out, makes it a tricky and mentally tough race,” said the Brazilian, who was with Ferrari from 2006 to 2013.

ALSO READ: Over S$44,000 for a week in S'pore to see F1? No sweat: Racegoers splurge for a weekend to remember

Leclerc’s team-mate, Spaniard Carlos Sainz, provided visual evidence of Ferrari’s sauna training on Instagram last Friday, as he turned up the heat with a clip of himself pedalling away on an indoor bike seemingly located inside a steam room.

“Extreme situations call for extreme measures... Getting ready for Singapore,” he wrote in the caption. On the video, the 25-year-old also added a label: “Preparing for the toughest race of the season.”

Meanwhile, Alfa Romeo’s Valtteri Bottas set tongues wagging on Tuesday with a reel of himself in a sauna, wearing only a hat decked out with reindeer antlers and nothing else.

The clip starts with him setting the temperature to 100 deg C and then cuts away to the Finnish driver sitting naked on the sauna’s bench with a canned drink.

Despite the extreme temperature, this is apparently normal for the 33-year-old as he is then heard joking: “Singapore ritual for some, Finnish daily ritual for others.”

Followers reacted with a mixture of shock, excitement and also amusement, as in the case of Massa, who dropped a sequence of cry-laughing emojis in reply. 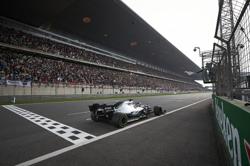