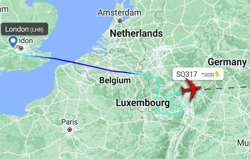 SINGAPORE (The Straits Times/Asia News Network): Passengers on Singapore Airlines flight SQ33, which was delayed after a bomb hoax, remained calm even as fighter jets escorted the Airbus A350-941 to Changi Airport early on Wednesday (Sept 28).

Alice, an American who declined to give her name, said it became clear that it was not going to be a routine flight when the pilot announced over the intercom that the landing was delayed due to airspace congestion.

About 30 to 40 minutes later, the pilot said there was an unruly passenger onboard that needed attention.

A social media user, who goes by the name Vera and said she was a passenger on the plane, said on Twitter at 10.25am: "This guy yelled at the back of airplane saying there is a bomb."

Flight SQ33, which left San Francisco at 10.26pm on Monday (Tuesday, 1.26pm Singapore time), was supposed to have landed at Changi Airport at around 5am on Wednesday, after travelling more than 12 hours from San Francisco.

Alice, 60, and her husband are based in Singapore. They were on the flight back here after a three-month holiday in the United States.

She said she did not hear the unruly passenger make his threat.

The 37-year-old foreign national was arrested by the police after the aircraft, with 209 passengers and 17 crew onboard, landed at Changi Airport at 5.50am.

Flight data from tracking site Flightradar24 showed the plane made three loops over the South China Sea, before continuing on to Singapore.

It was then escorted by two Republic of Singapore Air Force F-16 jets.