SINGAPORE (The Straits Times/Asia News Network): Viewers of hit K-drama Little Women, which filmed in Singapore in June and July, may have spotted local actors and iconic sights in its latest episode.

Tan plays a hotel receptionist, while Pang has a bigger role as the hotel manager. He interacts with Kim’s character, using her phone to translate between English and Korean, and shows her around.

The K-drama is a modern day reimagination of Louisa May Alcott’s classic novel and revolves around the lives of three sisters who become embroiled in a case that involves 70 billion won (S$72.5 million) going missing.

Many Singapore landmarks are featured in the episode, which sees the characters played by Kim and Wi Ha-joon fly to Singapore to withdraw a large amount of money.

There is also an exhilarating car chase scene down Robinson Road, which ends in a spectacular crash and Kim’s character in hospital.

In the preceding seven episodes of the Netflix series, which began streaming on Sept 3 with two episodes dropping weekly, there have been little teasers of Singapore.

With just four more episodes to go, viewers may still be able to catch glimpses of familiar local sights and faces. 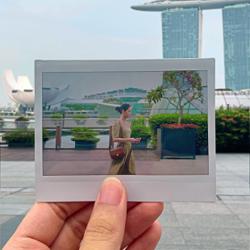