BANGKOK, Sept 27 (The Nation Thailand/ANN): Motorists may soon have to pay a fee of 60 baht (RM7.30) every time they enter inner Bangkok, according to the Transport Ministry.

A study on whether a London-style “congestion charge” is suitable for Bangkok will be finalised this year, the ministry’s Traffic Policy and Planning Office (TTPPO) said recently.

TTPPO director Panya Chuphanit said the study is part of the government’s five-year plan to reduce heavy traffic congestion on the capital’s roads.

The congestion-charge study is being conducted by Germany’s international cooperation agency GIZ, under its global TRANSfer III programme to “facilitate the development of ambitious transport mitigation actions”.

Panya said the study found that collecting fees from motorists who use inner Bangkok roads could reduce PM2.5 pollution by up to 36 per cent. The capital regularly suffers unhealthy levels of PM2.5, which is linked to premature death from lung and heart conditions.

Panya said the TTPPO will hold public hearings on the finished study before sending it to the Transport Ministry for consideration before the end of this year.

However, before adopting the congestion charge, the government would have to consider whether Bangkok mass transport systems were ready to absorb the extra passengers that would result.

“The [congestion charge] project may take time to put in place,” Panya said.

“For example, London studied it for 30 years before adopting fee collection.”

He added that the congestion charge may not go ahead if the government decides it would hurt commuters.

The study uses the MRT Blue Line as the boundary within which the fee would be collected.

The fee of 60 baht per trip would be collected digitally by a system similar to the existing M-Flow expressway barriers, allowing motorists to drive through central Bangkok and pay later. Panya said a similar system is used in Singapore.

Revenue from the congestion charge would be used to improve public transport and car parks for motorists to park and ride instead of driving into inner Bangkok, he added. - The Nation Thailand/ANN 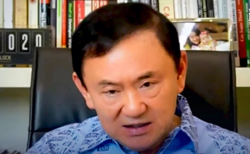