JAKARTA, Sept 24 (Reuters): Indonesia's anti-corruption body on Friday night (Sept 23) arrested a Supreme Court judge for his alleged involvement in a bribery scandal, one of the most high-profile magistrates to face investigation for graft.

The Corruption Eradication Commission's (KPK) deputy chief told a news conference that judge Sudrajad Dimyati had been detained after he voluntarily reported to the agency earlier in the day.

The KPK has detained six other suspects it believes were involved earlier this year in facilitating 2.2 billion rupiah ($146,520) in bribes to secure a favourable ruling in an appeal by a lending cooperative facing insolvency.

Dimyati did not immediately respond to a request for comment on the allegations.

Zahrul Rabain of the Supreme Court's oversight department said Dimyati would be suspended from the bench, but did not provide a timeframe.

The KPK carried out raids in Jakarta and Semarang this week and detained six people, Firli said, seizing nearly $148,000 in cash from the home of a Supreme Court official, the majority of it in Singapore dollars, some concealed in a hollowed-out dictionary.

A lawyer from the lending cooperative on Friday told reporters at the KPK that he was ready "to be punished as severely as possible", according to media.

The KPK was established in 2002 after the fall of late President Suharto, whose rule many critics said was kleptocratic.

The agency has won public support for taking on powerful figures, including high-profile politicians, businesspeople, a top judge and a former minister jailed in 2021 for 12 years for taking kickbacks in the procurement of pandemic assistance packages.

President Joko Widodo was elected in 2014 on a platform to fight graft but some critics say the KPK's powers have been curtailed during his time in office. The government denies the agency has been hobbled. - Reuters 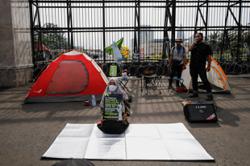