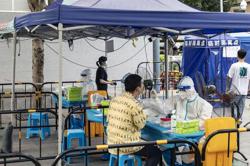 Researchers in southwest China say they have developed the world’s most advanced system for testing an aircraft’s ability to unload a weapon or small spacecraft at extremely fast speeds, allowing them to test a prototype hypersonic bomber.

Since the 1960s, military scientists have used a device known as a captive trajectory system (CTS) during wind tunnel tests to study the cargo offloading ability of bombers and other military aircraft. The systems typically use a small crane to move the bomb or missile away from an aircraft to replicate the parting of two objects against strong currents in a wind tunnel.

A team led by Lin Jinzhou of the China Aerodynamics Research and Development Centre in Sichuan province said they have built a hypersonic CTS that uses two robotic arms to hold and tilt a prototype aircraft and its cargo, allowing them to pitch, rotate and roll in nearly all directions. In 2017, Lin’s team built the world’s first CTS with the ability to function in a hypersonic wind tunnel against hot, superfast shock waves. The new device is a major upgrade of their earlier one-armed CTS, according to a paper published on Monday in the peer-reviewed Chinese journal Acta Aerodynamica Sinica.

During an experiment in a one-metre-wide (3.3 feet) wind tunnel, the upgraded device allowed the Chinese researchers to simulate offloading cargo at Mach 6 – six times the speed of sound – and obtain data with unprecedented detail and accuracy, the paper said.

When working together, the two robotic arms have 12 degrees of freedom, or independent joints – twice as many as in previous experiments. This allows researchers to simulate almost any phenomenon that can happen during separation.

This development pushes China ahead in the hypersonic race as similar wind tunnel tests conducted in other countries have required one component – usually the aircraft – to stay put. Additionally, these other tests were conducted at speeds lower than Mach 5, while hypersonic flight exceeds Mach 5.

“So far, the CTS tests available in other countries support one-body movement only. In the hypersonic range, there is no report of CTS being used at all,” Lin and her colleagues said.

China is developing a two-stage transport system designed to reach anywhere on the planet in just an hour. The system aims to use a large hypersonic aircraft to carry a weapon or vessel with passengers at an extremely high speed, then release them at near-space altitude so they can glide from one continent to another.

But separating the aircraft from its cargo at such high speeds can be dangerous, according to Lin.

When a hypersonic aircraft separates from another object, the high speed and pressure may result in shock waves, vortexes and other air flow patterns that can increase the chance of the plane and its cargo colliding. “Whether the storage can be safely separated from the aircraft becomes a big problem,” she said

The major difference between a hypersonic aircraft and an intercontinental ballistic missile is that the aircraft is expected to return and land at an airport after making the delivery.

Because test flights are costly, the development of hypersonic aircraft requires many wind tunnel experiments to help prevent accidents.

Putting a pair of mechanical arms in a hypersonic tunnel is not easy. The rigs, if not properly designed and placed, can jam the tunnel and reduce the accuracy of a test.

Wind at such high speeds can produce shocks as strong as an explosion. The robotic arms not only had to withstand repeated shocks for nearly a minute, but also keep the error of movement within a millionth of a metre, or one micrometre.

These extreme conditions placed heavy demands on the precision motors, gears and control system of the CTS, according to Lin’s team.

The movements of the two robotic arms had to be timed and coordinated precisely based on real-time flight conditions during the simulation. Communication between the arms was difficult because electrically charged particles that occur during hypersonic flight can jam sensitive electronic devices.

The Chinese researchers had to develop new sensors, computer algorithms and superfast communication technology to address these challenges.

Lin said that during the Mach 6 experiment, they observed the formation of shock waves between the hypersonic aircraft and separating cargo. These shocks bounced back and forth between the surface of the two bodies, causing the cargo to lose speed and assume an unexpected pitch that could lead to a collision with the aircraft.

Some shocks also went sideways, causing the aircraft to roll into an unsteady position.

By carefully adjusting the relative movements of the aircraft and its cargo, the researchers said they could find a safer way to offload under various flight conditions.

Chinese researchers have proposed several methods to drop a bomb or missile from a hypersonic aircraft. The proposals are based on computer simulations and are waiting to be tested in wind tunnel experiments.

Some have said a weapon could be released through a hole at the aircraft’s tail to reduce the risk of collision. Others have proposed ejecting the weapon from a side door on the aircraft’s body or simply carrying the bomb under the plane’s wings.

A research team with the Chinese Academy of Sciences in Beijing recently came up with a new approach inspired by aircraft carriers.

They designed a hypersonic carrier aircraft with a long flat surface on its back, similar to a runway. After the aircraft reaches a speed of Mach 7, a second stage on its back would fire up its own engine or be propelled by electromagnetic force to leave the platform like a plane taking off from an aircraft carrier.