Yoon, a political novice who took office in May, is in New York for the United Nations General Assembly, and chatted on Wednesday with Joe Biden during a photo op at the Global Fund where the US President had just pledged US$6bil (RM27bil).

“How could Biden not lose d*** face if these f****** do not pass it in Congress?” Yoon was caught saying to his aides afterwards in footage that went viral in South Korea.

A YouTube video of Yoon’s comments racked up over two million views just hours after it was posted, and “f******” became the number one trending topic on Twitter in South Korea yesterday.

“The president’s words and actions are the national dignity of the country,” one YouTube commenter wrote.

Yoon’s crude comments appear to refer to Biden’s drive to increase US funding to the Global Fund, which would require congressional approval.

The United States is South Korea’s key security ally, with Washington stationing about 27,000 troops in the country to help counter nuclear-armed North Korea.

Yoon, a former prosecutor, has made what analysts describe as a string of unforced errors during his first months in office, which is typically a honeymoon period for new presidents in South Korea.

At one point, his approval rating dropped to 24%, although it has since inched up to 32%. — AFP 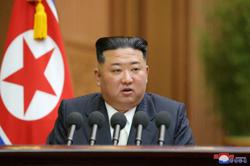