PHNOM PENH (The Phnom Penh Post/Asia News Network): Government officials are considering piloting a scheme that would allow Thai tourists with official residence in any of the seven provinces that border Cambodia to travel overland to Siem Reap province, especially Angkor Archaeological Park, with only a border pass and not a passport.

The idea was raised at a Sept 19 plenary meeting of the inter-ministerial commission tasked with facilitating travel into Cambodia at all ports of entry, which was held at the Ministry of Tourism and presided over by its chairman Thong Khon, who is also the tourism minister.

Siem Reap does not border Thailand, which would require participants of the scheme to enter Cambodia through one of the seven provinces along the frontier.

Following the meeting, Hor Sarun, tourism ministry secretary of state and deputy chairman of the commission, said that Khon was looking to make a formal request to the government for the scheme.

He contended that Cambodia would greatly benefit from these Thai holidaymakers’ trips, which may otherwise not have occurred.

“Some Thai people want to go see Angkor Wat, but they lack a passport. Now, those who live in a border province may apply for a border pass and be able to visit,” he said.

Cambodia Association of Travel Agents (CATA) president Chhay Sivlin, who attended the meeting, seemed to be all for the scheme, saying the move would help revive the provincial tourism sector amid uncertainty over tourist arrivals from distant markets, exacerbated by Covid-19 and global economic growth concerns.

“Allowing people residing in the seven border provinces to visit Angkor Wat will make a significant contribution to a rapid recovery of international tourism to Siem Reap,” she said.

Sivlin pointed out that a fair share of Thais living near the border is of Cambodian ancestry, “most” of which she claimed do not hold valid passports.

She declined to comment when asked of the possibility of creating a similar scheme for Vietnam or Laos.

Siem Reap Provincial Administration spokesman Liv Sokhon said that a green light from the government would encourage significantly more Thais to travel to Siem Reap, adding that the number of Thai holidaymakers visiting the province’s ancient temples is currently on an upswing.

He speculated that the scheme would lead to a greater understanding of Cambodian culture and the Kingdom’s religious complexes among the people living along the shared frontier, noting that a decent amount of Thais living in the border areas of the Isan region are of Khmer ethnicity.

Additionally, he argued, some of the Cambodians who relocated to Thailand during times of civil war and unrest would like to see these structures built by the ancient Khmer Empire.

“The Royal Government of Cambodia setting out a policy to establish such a border pass for Thais in the border provinces would create strong tailwinds to support tourist arrivals and increase national incomes to some extent,” Sokhon said, calling for clear conditions of travel and duration of stay so as to ensure the effectiveness of the scheme.

According to the tourism ministry, in the first eight months of 2022, Cambodia received a total of 998,272 international arrivals, up 720 per cent year-on-year, of which visitors from Thailand accounted for the lion’s share, or 348,660, up 477.3 per cent. 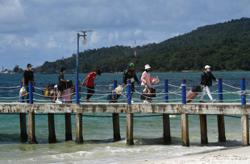