Queen Elizabeth II, in the eyes of Indonesians in the UK

Many Indonesians who live in the UK share their condolences and appreciation of the late Queen Elizabeth II. - AFP

JAKARTA (The Jakarta Post/Asia News Network): At the age of 25, young Queen Elizabeth II was crowned, replacing her father, George VI. The rest is history; for 70 years, she reigned as the longest monarch of the United Kingdom.

She passed away on Sept 8, at the age of 96. Throughout her reign, Queen Elizabeth II has been loved by people across the globe.

Not a few, however, see her as a symbol of the British colonial empire. Indonesians (no strangers to the brutality of colonialism) in the UK share their thoughts on the late queen.

Dede Elmi, 49, who has spent 14 years living in Birmingham, said that Indonesians in the UK liked the queen due to her “benevolent” image, as “a rock” of the monarchy.

“She also just seemed like an ordinary grandma next door to whom you could share your stories and she would show genuine interest,” shared the mother of two.

In addition, Dede shared her view that as a woman, the queen also portrayed a true regal image, shown by her confidence when standing next to the world leaders dominated by male figures.

Dede further shared that the queen had always advocated the importance of women’s empowerment, particularly on Commonwealth Day in 2011 with the theme Women as Agents of Change.

Anton Alifandi, 55, who has lived for the past 27 years in the UK, said that the presence of Queen Elizabeth II went against the image of the royal family as being arrogant and rigid.

Anton recalled the 2012 Olympics opening ceremony, in which Queen Elizabeth shared a stage with James Bond star Daniel Craig, as well as her latest Jubilee in 2021, in which the queen appeared with Paddington Bear, giving her a more approachable persona.

“She understands and interprets the different roles of being a royal and a politician,” Anton asserted.

Meanwhile, Candra Priadi, 66, who has been in the UK for over 30 years, saw the queen as an icon of the country and as head of “the firm”, piloting her family to survive turbulent times.

Candra said that the queen had handled the many controversies about her family poised and measurably.

“She is capable of navigating and observing the situation eloquently. It has been almost 17 years since Charles’ marriage to Camilla that [the queen] shared her wish that Camilla could be the queen consort.

"Back then, Camilla’s designation as a future queen consort was met with fury from the public, blaming her as the wrecker of Charles and Diana’s failed courtship,” Candra said.

“She portrayed an image of being a unifying and tolerant figure tailoring the time,” Candra shared.

Anton said it was understandable that people whose countries were part of the British colonies had demonstrated different views on Queen Elizabeth II as the leader of the monarchy.

“It should be noted that Indonesia was never a part of the [British] colony; thus, there might be different views,” Candra opined.

The British government briefly controlled what is now Indonesia from 1811 to 1815, with Sir Thomas Stamford Raffles being appointed the lieutenant-governor of Java from 1811-1816.

The British also stole manuscripts after winning the Geger Sepoy (Sepoy Mayhem) battle in 1812, during the reign of Sultan Hamengkubuwono II. There are also hundreds of babad (chronicles) and serat (texts), palace heirlooms, treasures and money that were stolen under the leadership of Raffles.

Some of the texts have been returned to Indonesia after two centuries. Though those incidents happened when the UK was not under the reign of Queen Elizabeth II.

The queen did visit Indonesia in 1974, along with Prince Philip, the Duke of Edinburgh, who was welcomed by then-president Suharto and Jakarta governor at the time Ali Sadikin.

“It is complicated to judge whether one European power was better than the other in terms of colonising other parts of the world,” Anton concluded.

Though Dede said she admired the queen, she did not always favour the monarchy.

"In royal families, members are entitled to get an exemption from most taxes. However, King Charles III and his late mother voluntarily paid some taxes.

“The monarchy is against democracy, and they [royal families] have privileges that civilians don’t have,” she added. 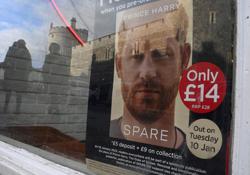