BANGKOK, Aug 30 (Reuters): Defending champions Thailand will face last year's runners-up Indonesia in the group phase of the Asean Football Federation (AFF) Championship after the draw was made on Tuesday.

Thailand defeated the Indonesians 6-2 over two legs in January to win the country's sixth title when the competition was played on a centralised basis in Singapore, a year later than scheduled due to the Covid-19 pandemic.

The Philippines, Cambodia and the winners of a playoff between Brunei and Timor-Leste complete the line-up for Group A.

Vietnam, title winners in 2008 and 2018, are the top seeds in Group B, which also features 2010 champions Malaysia, four-times winners Singapore, Myanmar and Laos.

The competition will revert to a home-and-away format for the first time since 2018, with group matches beginning on Dec. 23.

The top two in each of the five-team groups will advance to the semi-finals, which will be played over two legs before the final on Jan. 12 and 15. 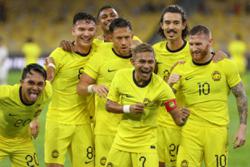