The rally across markets from their June lows appears to have run out of steam this week after minutes from the Fed's most recent meeting showed it was determined to keep lifting borrowing costs until prices were brought under control.

The gains have come in the face of a number of problems that have caused unease on trading floors, including China-US tensions, the Ukraine war, supply chain snarls and extreme weather across much of the northern hemisphere.

A statement by policymakers and comments from Fed boss Jerome Powell after last month's board meeting suggested they could be considering slowing the pace of rate hikes as the economy slows.

This week's minutes and comments from a number of Fed top brass reinforced that view, with some pouring cold water on hopes for possible rate cuts in the new year.

All eyes are now on next week's central bankers symposium in Jackson Hole, Wyoming, where finance chiefs and central bankers will speak with all attention on the utterances of Powell.

"We don't see how the Fed can pivot when they haven't achieved anything pretty much," said Marco Pirondini, of Amundi US.

"The market will have to become more realistic on this."

The prospect of tighter US monetary policy for an extended period lifted the dollar back up to multi-year highs against its peers.

And OANDA's Edward Moya warned that markets would remain wobbly for a while.

"Stocks will most likely struggle for direction for the rest of the summer as Wall Street is still uncertain with how aggressive the Fed will be in September," he said in a note.

"Traders however will continue to pay close attention to developments with the war in Ukraine.

"Turkish President (Recep Tayyip) Erdogan noted that he discussed ways on ending the war with (Ukrainian) President (Volodymyr) Zelensky. An imminent end to the war seems unlikely, but any de-escalations or improved passages for Ukraine grain exports would be welcome news for risk appetite.

However, others remained optimistic that the recent gains could be maintained.

Lewis Grant, of Federated Hermes, added: "We remain optimistic that the current rally will build into a longer term bull market, but cognisant that geopolitical risks remain elevated and it is too early to dismiss the possibility that we are witnessing a bear market rally. 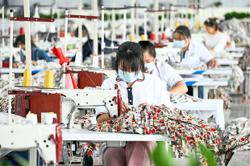