This follows an investigation into the death in custody of Suong Dorn, who died on Aug 7 shortly after his arrest during a raid on a coffee shop accused of harbouring an illegal gambling and cockfighting operation.

Hy recalled that during the Aug 7 raid on the den, 13 officers arrested four suspects, including Dorn, and were transporting them to the provincial gendarmerie Command for questioning.

While in the police vehicle, Dorn felt unwell. Pich Thai, another of the suspects, told Sereyvuth that he was sick. The officers then removed the handcuffs and opened the car windows to allow more air in.

Sereyvuth seemingly believed that Dorn was masquerading – or merely car sick – and the journey continued. But when Dorn’s condition worsened, the officers decided to take him to Baray District Referral Hospital, where he was pronounced dead on arrival by medic Sok Mony Udom.

Mony Udom said an autopsy found no signs of torture, but noted that this was some discolouration, consistent with a lack of oxygen. The other three suspects corroborated that there had been no torture or undue use of force by the officers.

“However, Menghong, Tangchuy and Sereyvuth were negligent and did not fulfill their legal obligations to protect the [deceased] suspect. Therefore, they are initially charged with involuntary manslaughter under article 207 of the Criminal Code, and may be sentenced to one to three years in prison if found guilty [by the court],” he said.

Hy said he had informed Dorn’s family that they have the right to appeal the court’s decision, and can sue for compensation.

Brigadier General Hang Thol, commander of the provincial gendarmerie, contributed 10 million riel [US$2,500] to Dorn’s family, in accordance with policy. 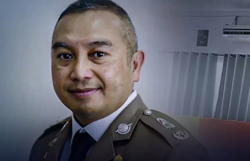