MANILA (Philippine Daily Inquirer/Asia News Network): Malacanang on Thursday (Aug 18) warned unscrupulous traders against hoarding sugar in a bid to take advantage of the current supply concerns in the country.

Executive Secretary Vic Rodriguez issued the warning following a raid in a warehouse in Pampanga that was suspected of hoarding thousands of sacks of sugar.

“The BOC’s (Bureau of Customs) Pampanga sugar warehouse raid may very well serve as a warning to unscrupulous traders who are currently hoarding their stocks of sugar in order to profit from the current artificial sugar shortage situation,” Rodriguez was quoted as saying in a statement released by the Office of the Press Secretary (OPS).

According to the OPS, the raid was conducted by the Clark-based Customs Intelligence and Investigation Service (CIIS) and Enforcement and Security Service (ESS) – Quick Reaction Team on Thursday.

Further, the OPS said the raid was made on orders from Rodriguez, acting on a directive from President Ferdinand Bongbong” Marcos Jr, for the BOC to exercise its visitorial powers to all customs bonded warehouse and check their inventory to ensure there is no hoarding of sugar.

Suspected hoarded sacks of imported sugar from Thailand were found inside the warehouse and seized by the Customs authorities, reported OPS.

The owners of the warehouse were given 15 days to present necessary documents to prove that the items were legally imported.

If proven that the Thailand sugar were smuggled, the warehouse owners may face charges of smuggling in relation to the provisions of the Customs Modernization Act, according to the OPS. 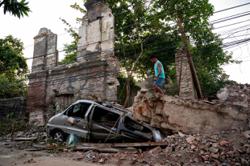