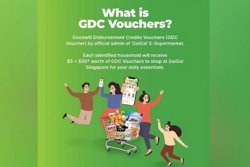 SINGAPORE (The Straits Times/Asia News Network): E-commerce firm GaiGai will be issuing new grocery vouchers to all Singaporeans from Friday (Aug 19), after apologising earlier for sending letters that made some people think the vouchers were from the Government.

The new Essential Goods Subsidy (EGS) vouchers are worth $25 each, and individuals can claim them via GaiGai's app to offset the cost of buying groceries through its platform.

Customers who have not redeemed them will no longer be able to do so.

The company had sent letters in July to residents in Hougang and Serangoon, informing them that they were entitled to GDC vouchers worth $55.

GaiGai's promotional material also included a Merlion in the letterhead.

The company said the vouchers were its way of giving back to society.

Lim added: "Coincidentally, my designer who was designing the marketing collateral noticed it rhymed with the Community Development Council vouchers and took inspiration from them."

CDC vouchers worth $100 were given to every Singaporean household to use at heartland shops and food stalls this year and last year, with the Government sending out letters about the disbursement.

Lim said the use of the Merlion was meant to pay tribute to the nation, as his team wanted to tie in its campaign with National Day celebrations.

He added that he had checked through the logos of various government agencies and determined that the Merlion was not used in any of them.

He also claimed the Singapore Tourism Board (STB) had encouraged the use of the Merlion logo.

However, a check on STB's website showed that the Merlion symbol is not permitted to be used as part of a logo, including in letterheads used by businesses.

"We are a young start-up, formed by a young team. We're not perfect, and we learn as we go," said Lim, referring to the controversy.