From left to right) Kyle Katoski, Leth Sayaphone and Soulichanh Phonekeo cut a ribbon to celebrate the groundbreaking of the solar project.- VT

VIENTIANE (Vientiane Times/Asia News Network): The Solar Attapeu Power Project (SAPP), a US$69.2 million solar PV project, including the transmission line, is set to commence construction works in Attapeu province and provide a catalyst for the renewable energy sector in Laos.

The Governor of Attapeu province, Leth Sayaphone strikes a gong as auspicious blessing to the success of the Solar Attapeu Power Project.

As part of the ceremony officials and project executives symbolically broke ground on the Solar Attapeu Power Project.

Since 2014 the SAPC development team has worked in close cooperation with the Lao government at the provincial and central levels to select this project site and to develop this first-of-its-kind utility-scale solar PV project in Laos.

Speaking at the ceremony, the General Manager of SAPC Lao, Dr Sisavath Souvannavong, said the solar project is scheduled for completion in late 2023 with an installed capacity of 64MWdc/ 50MWac.

The plant will create energy security for the country, employment opportunities for the Attapeu community, and generate 128GWh of annual electricity for direct sale to Electricite du Laos (EdL).

The Governor of Attapeu province, Leth Sayaphone, said the project would be a driving force for socio-economic development in the province and would help to improve people’s standard of living. 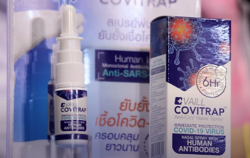