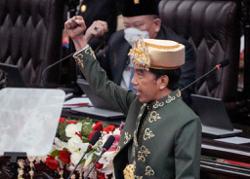 JAKARTA (The Jakarta Post/Asia News Network): Defence Minister Prabowo Subianto has officially announced his intent to run for president in 2024, as his Gerindra Party forges an alliance with the Islam-based National Awakening Party (PKB), setting the stage for his third bid for the country’s highest office after two consecutive losses to President Joko “Jokowi” Widodo.

Prabowo's decision came after Gerindra members unanimously agreed to nominate the party chairman as their sole candidate on Friday (Aug 12) during a two-day national leadership meeting in Bogor, West Java.

“I hereby declare with a sense of duty that I accept your request [...] to be nominated as a candidate for the president of the Republic of Indonesia,” Prabowo told a cheering crowd.

The former Army general also addressed why he had decided to run again after losing the election three times, twice as a presidential candidate in 2014 and 2019, and once as a running mate in 2009.

“For a warrior, falling is normal. If you fall, you stand up again. We [rise again] with joy and optimism,” Prabowo said.

“As long as I am still given breath by almighty God, given strength, I will continue to fight for my people, for my nation, to achieve what was pioneered by the founders of our nation.”

Prabowo also took the time to thank his party for sticking beside him throughout his two losses to erstwhile rival Jokowi, as well as after he decided to join Jokowi’s Cabinet soon after the 2019 election.

“I believe my decision to join [the Cabinet] was the right call,” he said.

“We have gone through [many] struggles, but at that time I believed in my heart, my instincts, [that] I didn’t want this nation to be divided.”

While the past two presidential elections, which pitted Prabowo against Jokowi, have been described as two of the most polarising in Indonesian history, Prabowo has begun portraying himself as a political successor to his former rival.

In front of his supporters on Friday, Prabowo praised Jokowi for what he said was the President’s wisdom and statesmanship in leading the country and reconciling with former political opponents.

“I was [Jokowi’s] rival for 10 years but he is a selfless man and initiated reconciliation. He asked me to join his government.”

With Jokowi barred from seeking a third term by the Constitution, speculation is rife that the President will support Prabowo’s 2024 candidacy in exchange for the candidate’s loyalty.

When asked about Prabowo’s announcement at the Presidential Palace on Friday, Jokowi said he had no authority to prevent Cabinet members from running for public office.

“If that is interpreted as my blessing, then I have no objection,” he said.

Prabowo wrapped up the Saturday session by signing a deal with PKB chair Muhaimin Iskandar to “work together” to win the 2024 presidential election and to leave the door open to other parties interested in joining the electoral alliance, which has yet to name its candidate pair.

PKB politicians said the party had no objection to Prabowo’s presidential bid but stressed that Muhaimin remained their sole choice for his running mate – even though his electability polling is not as strong as Prabowo’s.

"To make it clear, the candidates from PKB and Gerindra won’t be anyone other than Muhaimin and Prabowo,” PKB deputy chairman Jazilul Fawaid said.

NU is the country's largest Muslim organisation and counts Vice President Ma'ruf Amin as a prominent member. But while NU’s leadership is widely considered to be closely aligned with Jokowi, Muhaimin's vice presidential bid may be challenged by an NU faction that supports Yahya Cholil Staquf, another prominent member of the organisation.

Over the past year, Gerindra and the ruling Indonesian Democratic Party of Struggle (PDI-P) had hinted at the possibility of pairing Prabowo and the PDI-P’s Puan Maharani, whose notably low electability polling often dragged down their combined figure.

The PDI-P, the only party permitted to nominate a presidential and vice presidential candidate without forming a coalition by virtue of its robust representation the legislature, has yet to team up with other parties or to name a candidate pair, but Puan plans to embark on a series of talks with political figures later this month. 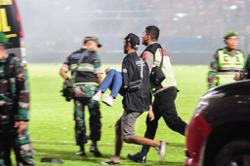 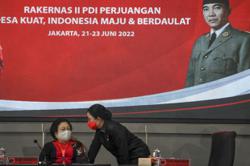