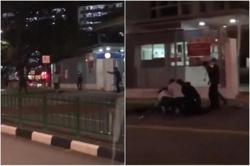 Ezra Jeet Singh was seen confronting an older man on board an MRT train and forcing him to say that he was a coward. - STOMP via The Straits Times/ANN

SINGAPORE, Aug 13 (The Straits Times/ANN): While on a train with other commuters, a teenager approached an older man and allegedly bullied him into declaring himself a coward.

The younger man, who was dressed in black, can also be heard calling the other commuter a coward in a video circulating online.

He also made derogatory comments about the older man's mother.

Ezra Jeet Singh, 19, was on Saturday (Aug 13) charged in court in connection with the case. Singh faces one charge of committing a public nuisance.

The age of the man he had purportedly targeted - Ismail Mohd Dawan - was not stated in court documents.

In a statement on Saturday, the police said they received a report that a man was allegedly causing a commotion on a MRT train at about 11.10pm on Aug 5.

In a video contributed by Stomp, the younger man can be heard accusing the other commuter of staring at him.

The older man was in a corner seat reserved for the elderly, among others.

During the exchange, the younger man says: "Tell them you're a coward."

The commuter then turns to the other passengers in the cabin, raises his hands and says: "I am a coward."

When police officers arrived at Bedok MRT station, however, the man was no longer there.

"Police officers from Bedok Police Division worked with officers from the Public Transport Security Command to identify the man. He was subsequently arrested," the police said.

If convicted of committing a public nuisance, Singh can be fined up to $1,000. - The Straits Times/ANN