Mahouts hold Indonesian national flags atop Sumatran elephants as they cross a river during World Elephant Day and ahead of celebrations to mark Indonesia's Independence Day on August 17, at the Conservation Response Unit (CRU) program in Sampoiniet, in Indonesia's Aceh province, on August 12, 2022. - AFP

JAKARTA, Aug 13 (Xinhua): The Indonesian government has maintained its target to draw 1.8 million to 3.6 million foreign tourists to the country in 2022, despite a surge in the COVID-19 daily cases, Minister of Tourism and Creative Economy Sandiaga Uno has said.

He remained optimistic because the country was moving to "improve the quality and sustainability of its tourism destinations, such as developing tourism villages."

"We can survive the pandemic whilst boosting our tourism sector thanks to our adherence to the health protocol and massive vaccinations," Uno said in a recent virtual seminar.

Indonesia's tourism sector, indeed, has enjoyed a boom in tourism as foreign travelers have started to flock back into the country since most of the social restrictions were waived earlier this year.

In June, the South-East Asia's largest economy saw a 1,973 percent increase of foreign tourist arrivals in June compared to the same month last year, according to data from the country's Central Agency of Statistics (BPS). Bali resort island remains the most popular destination for the tourists.

Tourists from Australia dominated the total number, accounting for 64,500 visits or 18.7 percent from foreign arrivals, followed by Singapore with 53,000 visits, Malaysia with 31,700 visits, India with 25,700 visits and the United States with 17,200 visits.

During the first semester of this year, Soekarno-Hatta International Airport in Jakarta served no less than 18.15 million passengers, or 100 percent higher than the same period of last year, when there were only 9.1 million passengers, mostly from and to Bali, according to the state-owned airport management company PT Angkasa Pura II.

BPS head Margo Yuwono said recently that the significant increase in foreign tourists showed Indonesia's speedy recovery after the pandemic. "The high increase in our tourism sector is in line with the improvement of health care facilities across the country," he said.

However, data from the Health Ministry has shown that Indonesia has seen rising cases of Covid-19 infections. Throughout June, in capital Jakarta only, the average daily increase reached 1,000 of reported cases per day.

Despite the fact, Uno said that the government would significantly add more planes and flight schedules to attract more tourists.

He even asked tourism business owners to offer discounts, cashback and special tourism packages ahead of Indonesia's Independence Day, which falls on Aug. 17 every year.

However, Uno said that all people were expected to keep following the health protocols.

Separately, Deputy Chairman of the Indonesian Hotel and Restaurants Association for Bali, I Gusti Agung Rai Suryawijaya, said that the Group of 20 (G20) Summit that would be held in Bali in November would significantly raise the number of foreign tourists. - Xinhua 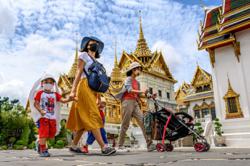