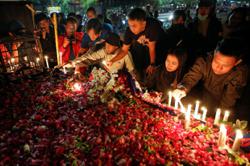 Members of the US Army 25th Infantry Division Brass Band, based in Schofield Barracks, Hawaii, performing during Super Garuda Shield 2022 joint military exercises in Baturaja, South Sumatra, Indonesia, on Aug. 12, 2022. Soldiers from the US, Indonesia and Australia joined the live-fire drill on Friday, part of annual joint combat exercises on Sumatra island amid growing Chinese maritime activity in the Indo-Pacific region. - AP

* Sarawak to woo tourists from Singapore

* Court orders S$1.25mil to be confiscated from man who ran illegal 4D and Toto operation

* 'No basis for immunity': Judge explains why he did not acquit man accused of killing Felicia Teo

* Rajapaksa arrives in Bangkok from Singapore

* Indonesians must prepare for a potential fuel price hike: minister

* Vietnam ready to discuss economic issues with US: spokeswoman

* HeroRATs to demine 8sq km of Cambodian land this year

* Shake-up fails to lift support for Japan's cabinet amid questions over church: surveys